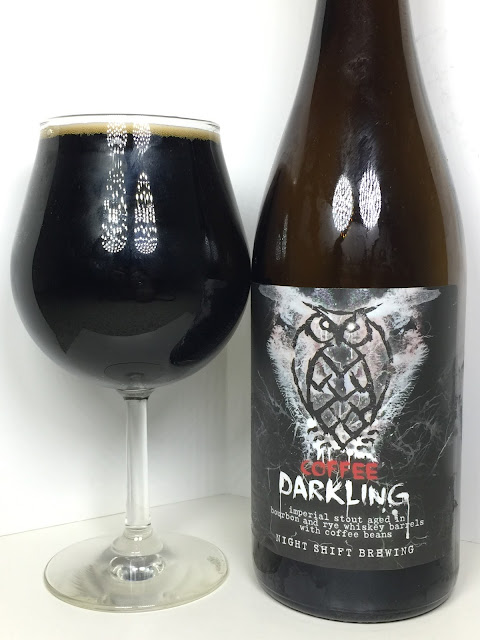 "To create Darkling 2017 we filled both bourbon and rye whiskey barrels with our imperial stout, then set them away to age. Once the barrels had imparted their oak character, we blended them and prepared some special treat - Coffee Darkling aged with coffee beans"

Sits pitch black in the glass with just the smallest bit of ruby red on the edges. The pour produced less than a finger of khaki-colored head.

The coffee is nice and fresh on the aroma and there's a lot of sweetness from the bourbon. I'm getting a strong black cherry and dark fruit aroma to this along with molasses, black licorice, leather, brown sugar, and a touch of vanilla extract.

Surprisingly, the dark fruit presence from the aroma is the biggest component on the taste. Raisins, cherries, and figs remind me of a solid Quadrupel, but this is still a massive imperial stout at its core. The coffee is still well-represented and it is more of a bitterless cold-brew than anything else. The bourbon is still a big player with it's sticky, sweet taste that is coating every inch of my tongue with a tiny bit of residual alcohol to boot. As it warms, a significant roasted malt presence really starts to pop. The back end has a surprising amount of bitterness which lingers long after each sip has gone away. A little touch of additional coffee comes in on the finish with a small vanilla kick.

Mouthfeel is as full as it should be. I distinctly remember the standard Darkling having one of the thickest mouthfeels of any beer I have ever had. While this is perfectly to spec for the stlye, this does not match the viscosity of that beer. Alcohol is subdued for the most part with some residual flavor as mentioned before on the taste. Take this one slowly as it will knock you on your ass.

Coffee Darkling did have a good amount of coffee, but it wasn't as big as I expected. Still, the added coffee beans helped enhance the natural coffee notes of the base stout. Bourbon presence was sticky and sweet, but rye whiskey seemed to be absent. All that being said, as a barrel-aged coffee stout, this was a stellar offering well worth several hours of imbibing on during a cold winter night.