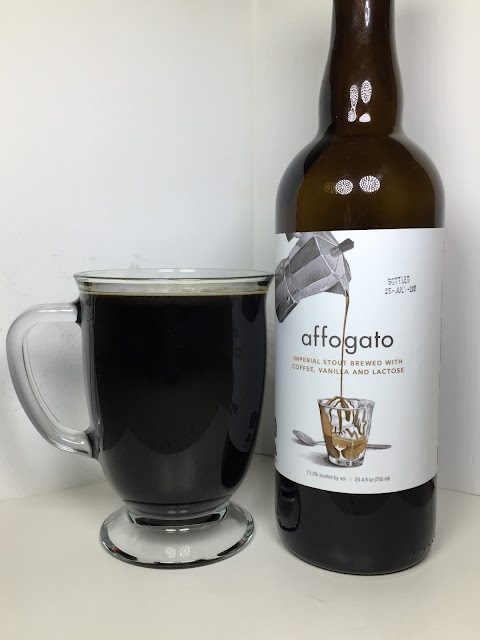 Pours like a typical imperial stout with a pitch black body and brown on the edges. Not much head was generated on the pour (13%), but what was there was light brown and disappeared quickly.

The base stout is letting off aromas of dark chocolate and they are mixing in beautifully with this rich coffee. I also pick up sugary caramel and a dollop of vanilla. Rich lactose sugar also runs wild with creamy iced coffee and almost a nutty, hazelnut (or even peanut butter) quality.

As expected, the taste is sweet, sticky, and sugary. Putting the obvious aside, this is a decadent dessert beer. Despite not being made with chocolate, the rich, dark, fudgy chocolate flavors are exploding on the taste. It's kind of like brownie batter, but more bitter in flavor. Next on the list is the vanilla. which is assisted by the lactose sugar to produce almost a muddled sugar taste which leaves residual flavors on my tongue with each sip. More of that caramel is here along with butterscotch candy. The warmer it gets, I get more fluffy milk chocolate. Deep in the back, the base beer lets off dark roasted malts and the smallest amount of black cherries.

Mouthfeel is silky and calm. Carbonation is non-existent, and as previously mentioned, this one sticks to everything. I do think at times the sugary sweetness can be a bit much, so some carbonation would have helped to move this along, but it's not a big enough of a disturbance to ruin my day. The alcohol is nowhere to be found. I don't even get the slightest hint of warming which is impressive.

Affogato was similar to Trillium's Trillbomb in the sense that this might require a diabetes test after consumption, but the end result was a stellar beer. While the base Imperial Stout is only partially noticeable, this dessert beer was rich, sweet, and complex. Coffee lovers, vanilla lovers, chocolate lovers, and anyone else can all unite as Affogato hits all the right notes. Who knows, maybe they'll make a barrel aged version one day...oh wait...they did! Is that foreshadowing? Well, you'll just have to tune in for future reviews to find out...*evil laugh*