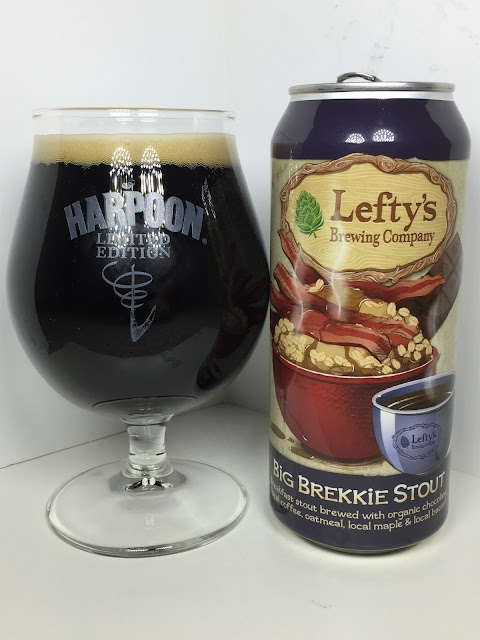 "Lefty’s Big Brekkie packs in a quintet of delicious ingredients woven together to amuse the taste buds. Locally roasted coffee and local maple syrup add the necessary touch of a traditional New England breakfast. We include flaked oats for extra creaminess and cocoa nibs for a natural, chocolaty sweetness that lures you in from the aroma to the end of your pint. We had to top it off with bacon, our favorite food, for the ultimate breakfast brew."

Poured out dark brown, but sits black in the glass with brown edges and a finger of almond-colored head.

The aroma is subtle with the ingredients, but it still gives off a good amount of coffee and the maple isn't too sugary for its own good. The salty bacon is noticeable and adds a good amount of smoke. Chocolate is hard to come by, but the faintest bit of bitter dark chocolate can be found.

I'm not sure how to comment on the taste. While there is nothing repulsive or bad-tasting about this, it is shockingly lacking on the promised ingredients. It is hefty on the roast, but not coffee roast. Deeply roasted malts with some of that smoke from the aroma are the ghostly remains of the aroma. A slight coffee bitterness is noticeable as it gets warmer, but that's pretty much it for the breakfast stout characteristics. That being said, as a basic oatmeal stout (It's a stout brewed with oatmeal, I'm calling it an Oatmeal Stout), the base beer is quite delectable. I don't get maple, but it's more of a molasses tinge and it creates a sweet experience throughout. Multi-grain bread and nuttiness appear at the peak of the flavor profile with even some dark fruits for good measure.

Mouthfeel is smooth, soft, and creamy. It gives your tongue a hug on each sip. Alcohol is neither here nor there and this is easy to slug down for 8.5%.

While Big Brekkie Stout didn't successfully cash in the Money in the Bank contract of breakfast stouts, it worked beautifully as a standard Oatmeal Stout. Was that the goal? No, but you can't argue with a good-tasting beer when it's given to you. It obviously would have been nice to have an explosion of chocolate, coffee, bacon, and maple, but hey, what was in the can was still a tasty brew.