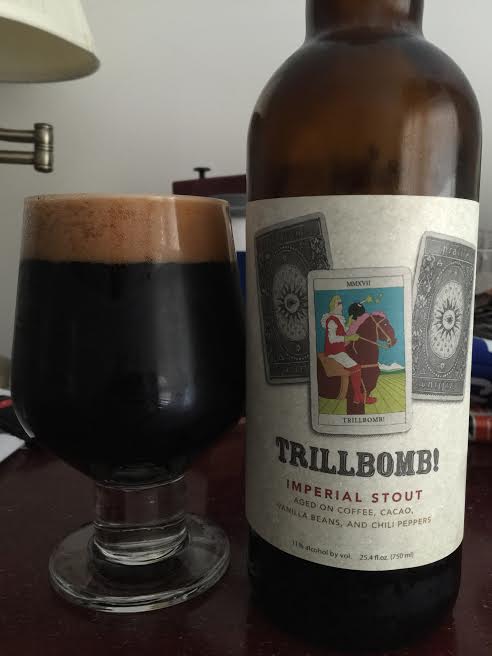 "For this collaboration, we took the grain bill for Trillium’s Night & Day and combined it with the flavor sugar and spice additions from Prairie’s BOMB! to create TrillBOMB! Brewed with cacao, coffee, Ancho chilis, and vanilla, TrillBOMB! has an intense dark chocolate and oatmeal cookie aroma, tastes of hot chocolate, sweetened cold brew coffee, and ends with a subtle warmth from the Ancho chilis. The coffee used in TrillBOMB! was a mix of Barrington’s Italian and Spaceship Earth’s BOMB! blend (from Oklahoma)."

I love it when I get the Shane Diesel pour! Pitch black body and a a finger of dark brown head.

The aroma is coffee-forward with lot of vanilla to match. It's like iced-coffee with lots of cream. The more it warms, the more the vanilla starts to take control, but then there's a small bit of pepper skin to boot.

Diabetes: Table for two. No, but seriously, I think this is pure sugar. I'm not knocking it completely, but just know going in that you should have Wilford Brimley on stand-by. 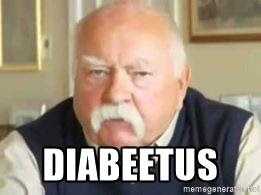 The first thing that springs to mind is dark chocolate brownie batter. I think this could be the drink of choice to pair with a decadent holiday dessert. I didn't get too much chocolate on the aroma, but it is a force to be reckoned with on the taste. There's a local place that serves a frozen hot chocolate, and the taste reminds me most of that. I think the coffee comes off more bitter here much like dark coffee grounds or black iced coffee, which actually fits with the dark chocolate taste. The vanilla has transformed into an almost marshmallow flavor for an even bigger dessert feel. The peppers add some warmth, but I actually pick up a lot of their flavor, so I'm glad they are contributing to the actual taste and not just providing some heat. The longer I let this sit, even more flavors emerge as caramel and butterscotch are forcing themselves to the front of the line. From start to finish, there's a bitter presence which I contribute to the coffee and chocolate and the the very back end goes back to the peppers.

I think the thickest beer I've ever had was the Night Shift Darkling, but TrillBOMB might have thrown the blue shell at it. It's all-syrup Super Squishy thick in its consistency, but I gotta say, I love every second of it. With a beer so sweet and dessert-like, I think the body on this is appropriate. It has a silky texture and a surprising amount of carbonation. As for that 11%, it's not in the beer. This is one you need to take your time with, but it's a long trip worth taking.

TrillBOMB was an unbelievably thick, rich, flavorful, and exquisite Imperial Stout. It's rare that every promised ingredient not only shows up, but is equally huge in its contribution to the experience. This is not just a beer to pair with dessert, but a beer that IS the dessert. The so-called "Mexican Hot Chocolate" stout really boomed last year and I have had examples that were stellar. I think TrillBOMB nukes the competition due to the intensity of the chocolate, vanilla, and coffee while having the peppers drop in genuine flavor in addition to heat. I may need a shot of insulin after my bottle, but it's totally worth it.