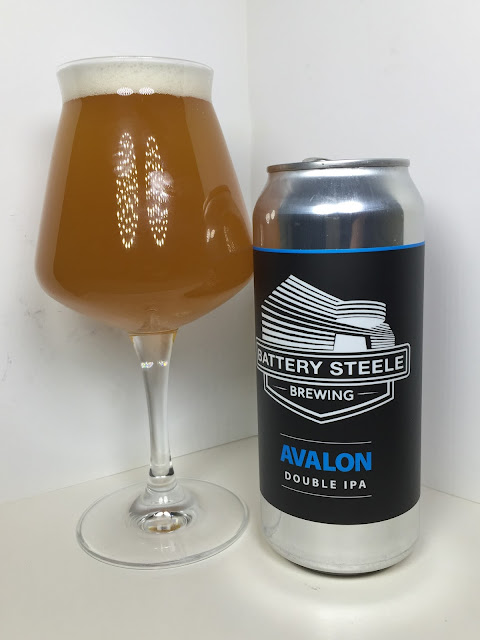 "This beer is packed with El-Dorado, Mosaic and Amarillo hops."

Tucked in the back of the infamous industrial park in Portland, ME is Battery Steele Brewing who was just named the Best New Brewery in Maine by RateBeer. How does my first review from these guys do?

Pours out a moderately hazy light orange with a finger of white head.

Floral notes are huge on the aroma as are lemons and melons. It's like being outside on a sunny day picking strawberries with the heavy flower and grass influence combined with tart berries.

Much like the aroma, this one is a flower bomb. Not only that, but the strawberry (or just berries in general) are just as big as any floral character and really add a fruity kick. Some of the tartness returns thanks to a lemon candy taste and subtle grapefruit. Tangerines add a dash of sweet flavor and then there's a decent thud of dankness near the back end. Fresh grass keeps with the overall floral theme and adds a an earthy touch.

Mouthfeel is calm for a DIPA, but then again, it is a DIPA clocking in at just 7.5%. and it has a light and crisp feel. It may walk the line of single and double, but it still feels like a Double IPA to me, dammit!. Alcohol is non-existent and the abundance of fruity flavors make drinkability a breeze.

Avalon was a buffet of flowers and berries. It was almost devoid of genuine hop bitterness, but a clean dank finish put those worries to rest. It borders on being a single IPA rather than a double, but it passes for an Imperial due to a complex flavor profile and full body. The flowery hops don't get too much credit these days, but Avalon lets them shine beautifully.