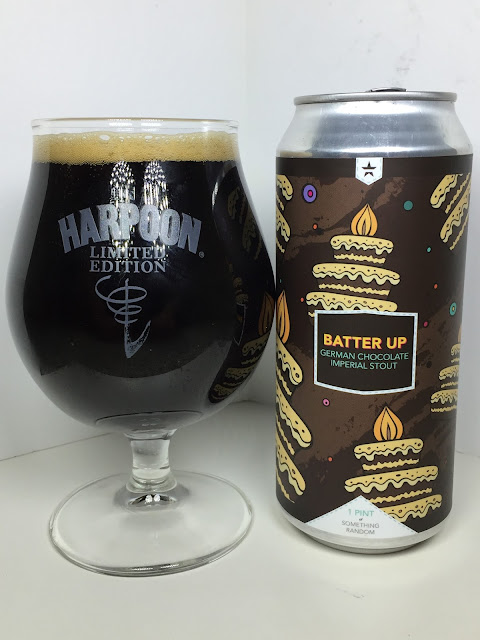 Typical stout appearance with a black body, brown edges, and barely a finger of almond-colored head.

The aroma is more roasty than anything else with a big malt presence and coffee grounds. A tiny bit of vanilla is noticeable and so is some lactose, but they are not heavy hitters. Some dark fruit and cherry character is here, but the cocoa is surprisingly absent. No coconut to be had either.

The taste is pretty much a carbon copy of the nose.  As far as I know this was not made with coffee, but the significant roasted presence and roasted malts give me that aforementioned burnt coffee ground taste with a bit of a smokey quality too. The taste does yield some surprising sweetness with vanilla extract and more of that lactose sugar. A sticky molasses flavor emerges on the transition and then signs of coconut come in the form of a subtle toasted flavor, but that's about it. A bit more vanilla on the finish, but nothing too crazy.

Mouthfeel is smooth and creamy, which maybe is where the coconut was its biggest contribution. The body does come up a tad thin for a 10% Imperial, but I won't call it watered down. The alcohol itself is nowhere to be found.

Batter Up promised a German Chocolate Imperial Stout, but it was a can of roasted malts. Granted, some of the promised ingredients were here, but nothing popped as much as it should have. It works nicely as a sipper, but as a flavored, dessert stout, it didn't come through in the clutch.