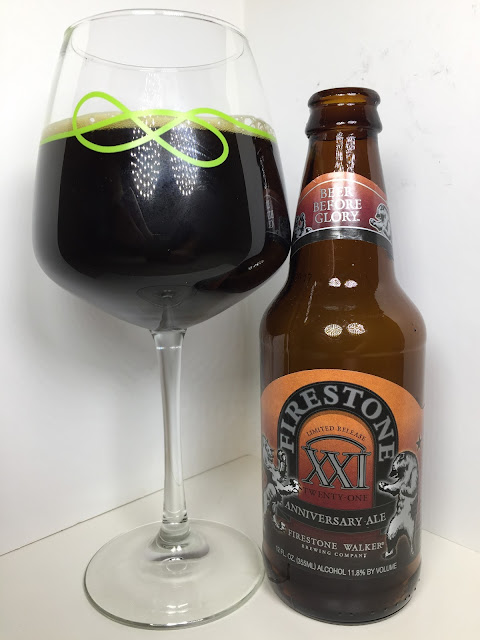 "Since founding our brewery in 1996, we have specialized in the rare art of brewing beer in oak barrels. In the fall of 2006, we released a limited edition oak-aged strong ale called 10 to commemorate our 10th anniversary. The experience was greater than any one of us could have ever imagined. We now present XXI, our 12th release in what has become an annual Anniversary Ale. At 21 years old, our brewery is finally drinking age!"


It looks black in the picture, but it is just an intensely dark ruby red with brown edges and less than a finger of tan head.

Dark fruits and rum hit me first on the aroma. This has plenty of vinous notes to go around too. Sweet bourbon, char, and tobacco hold their own in this fight as does some cherry and roasted malts. The warmer it gets, the more milk chocolate and dark chocolate come out.

Much like the aroma, dark fruits are first and foremost. Raisins, plums, figs etc are coming out of the Stickee Monkee and there's some noticeable molasses and brown sugar to boot. More vinous notes from the aroma with red grape and black cherries adding some sweetness. Faint touches of dark chocolate appear on the transition and make for a nice cherry cordial. Some slight black licorice, but nothing too overpowering. The barrel characters are surprisingly subtle, but spice from the rum and plenty of sticky bourbon is to be had. This is really a solid dark fruit bomb.

Mouthfeel has plenty of thickness and it leaves a sticky aftertaste with each sip. The body is soft and smooth. Alcohol is a refined flavor, but no burning or even warming whatsoever. You can't tell this is 11.8%.

Firestone XXI was a complex blended beer, but I wouldn't rank it at the top of all of the other anniversary ales. The final blend was predominantly stout, but I mostly picked up the Quad qualities here. It still made for a tasty brew. It's another solid edition to the lineup.