Trillium and Omnipollo Covered in Puppies 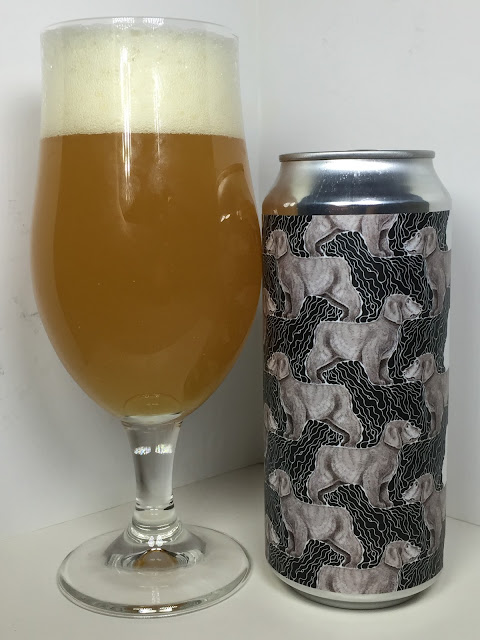 "Initially brewed and released as a draft only beer in Sweden, Covered in Puppies has now arrived stateside! The label design was inspired by Karl & Kevin's favorite artist when they were kids: MC Escher. Karl and Kevin were able to fully realize the inspiration from Escher and meld that with the respective styles of each brewery. A nose of tropical fruit and bubble gum take the lead with and woody resin undertones. Palate is juicy with flavors of creamy pineapple and freshly baked bread, wrapping it up with a soft -as-a-puppy bitterness."

The aroma has a nice dankness to it as well as sweet citrus. Berries and lime zest also stand out to go with some melon. Good bitterness throughout too.

The taste leans towards the sweeter side which matches up with the aroma. It reminds me of blood oranges, grapefruits, and clementines. That bitterness from the aroma is well represented here, and like the aroma, it is a constant from start to finish. Further notes of bubblegum dance on my tongue and a dank quality greet me on the transition, but touches of spice and black pepper kick in for even more complexity. The back end opens up to a solid malt character and more of the bitter hop juices.

Mouthfeel is full, creamy, and relatively calm. No sign of alcohol and the sweeter citrus flavors make drinkability easy.

Covered in Puppies was able to extract many characteristics of the hop varieties used to produce a big, flavorful Double IPA that retained high drinkability. I liked how the citrus and bitterness were able to work together, but the beer also succeeded in not letting one single hop used dominate, but rather had everything working as a cohesive unit. It made for good complexity and a vacation for the taste buds.