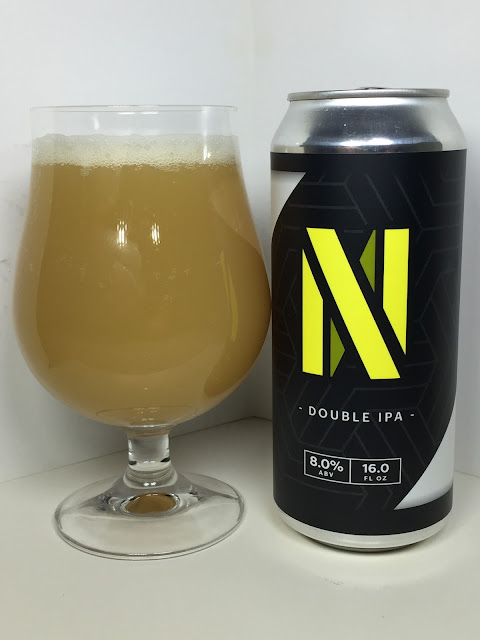 "Neverender is an Australian hopped (Galaxy and Topaz) Double IPA.  A flavor profile dominated by tropical fruit is balanced with pilsen malt and malted wheat.  At 8.0% this hugely aromatic beer is still very drinkable for the style."

Not just hazy, but a turbid appearance that is dark yellow in color with a finger of white head. Looks like a peach smoothie.

I'd describe the aroma as dank pineapple juice. Hop juice and resin is powerful and I'll even toss in "grapefruit covered in weed" as another image to melt your minds. Orange sorbet and a sulfuric quality are all just as pungent. Juicy Fruit gum with fusel alcohol as well. So many flavors and they are all intense.

The taste is packed to the brim with mouth-watering dankness and pure hop juice. At the same time, citrus flavors are allowed to shine, especially that grapefruit and lemon zest. This is more on the tart citrus spectrum rather than sweet. There ain't nothing sweet about this beer. The taste also takes on a spicy/herbal quality with notes of black pepper and even some incense and mint. There's a real hop bite on the transition, and by bite I'm talking Bruce the shark eating Quint kind of bite. The beer contains not only a resounding thud of dankness, but intense hop bitterness, but somehow it doesn't hinder drinkability.

Mouthfeel is full and creamy. Alcohol presence is minimal, but still present. At the same time, this doesn't ruin the experience. It goes back to that sulfuric/fusel qualities, but again, it is enjoyable. This is noticeably dry, but it's not worth losing sleep over.

Neverender came out and blasted my taste buds with a flood of dank and juicy hops. The only hindrance is that small amount of alcohol taste, but those who can get past it will find an incredibly complex Double IPA with an uncanny amount of flavor.