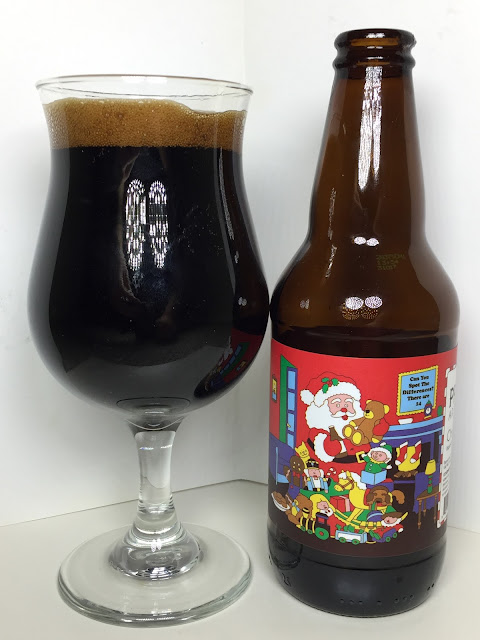 Pours out like motor oil and sits in the glass as black as the "Smell the Glove" album. I got maybe a finger of dark brown head. Looks fantastic.

The most dominating flavors are no doubt the chilies and cinnamon. Coffee isn't far behind and that coffee may also be lending some spice and jalapeno too. The chocolate I'm getting is super dark and rich almost like chocolate syrup. Vanilla is hard to come by, but milk chocolate happily takes its place.

Much like the aroma, the chilies are up front and very much in your face. There's no heat and it is all flavor which actually covers every inch of my tongue and lingers nicely. The taste has a surprising amount of sweetness which I might attribute to the vanilla that wasn't present on the nose. It's making for almost a lactose or sugary note. When that combines with the coffee, it is similar to iced coffee with cream. Then after all of that, cinnamon still tosses in its two cents making this feel like a spice cabinet when added to the chilies. Underneath all of that, I pick up the base stout's dark fruits and cherry flavors with lots of roast.

Mouthfeel is perfect. It's thick, viscous, and coats everything in sight. Some of the flavors might be cloying at times, but given the flavor profile and massive body, this is expected and forgivable. That 13% is a myth because there is no alcohol to be found.

Christmas Bomb may have just essentially been Prairie Bomb with cinnamon, but boy did it deliver a complex and flavorful stout. A lot of beers with cinnamon tend to actually hold back on that spice, but in this case, it was one of the stars of the show and held up throughout the experience. With the (minor) exception of some lacking vanilla, this was an excellent stout that truly felt like the Christmas season.