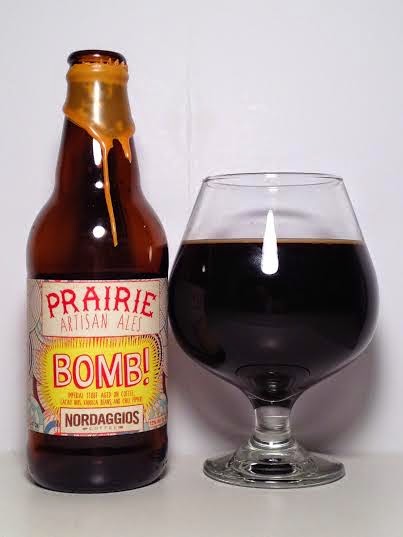 When I first heard about Bomb! and read the ingredients, I immediately thought of Cigar City's Hunahpu. It seems like a lot of breweries these days are experimenting with chili peppers or spiced stouts. They sound intimidating, but beer geeks are praising their creativity and drinkability. Today we have Bomb! which is an Imperial Stout aged on coffee, cacao nibs, vanilla beans, and chili peppers. Chili peppers in beer have been more miss than hit for me and I have had the aforementioned Hunahpu before and remember being underwhelmed. Bomb! comes highly acclaimed, so hopefully it can convert me.

Pours jet black, no light around the edges at all. I barely got any head (rimshot), but the little I did get was creamy and light brown.

It has a very strong aroma of coffee, chocolate, and vanilla. It actually quite fudgy. I can't really pick up the chili peppers, but I get something more along the lines of green peppers or a green pepper skin. I can definitely get somewhat of a heat from the chili peppers on the nose deep in the back. It actually has a curry heat and smell to it.

The taste has some bitter coffee at the front of the tongue with espresso hints. The pepper flavor is prominent here with a nice burn on the back of my tongue and in my throat. I have to be honest here and say that I've read some stories online about infected bottles and the seal breaking. Sorry to say, but I might have to agree with them. I've heard when some batches of Bomb! were waxed, it broke the seal on the cap and allowed air to get in. It has a metallic finish and no malt presence. Vanilla and cacao are non-existent and it's actually incredibly bland on the palate. For a split second, as soon as the beer hits your tongue, you do get a rich fudge brownie taste. Then, it disappears in an instant, leaving no flavors behind. Very disappointing.

While it doesn't coat your tongue like many others of the style, it still has a relatively thick feel and some minor carbonation bubbles. There is a little heat on the finish thanks to the chili peppers, but no real alcohol taste.

Bomb! smelled great, but I fear I may have received an infected bottle. Too bad because I can only imagine what it would have been like if the aroma carried through on the taste. I guess we'll never know, but I have to judge it as it is and hopefully Prairie rectifies the waxing issue for future batches.