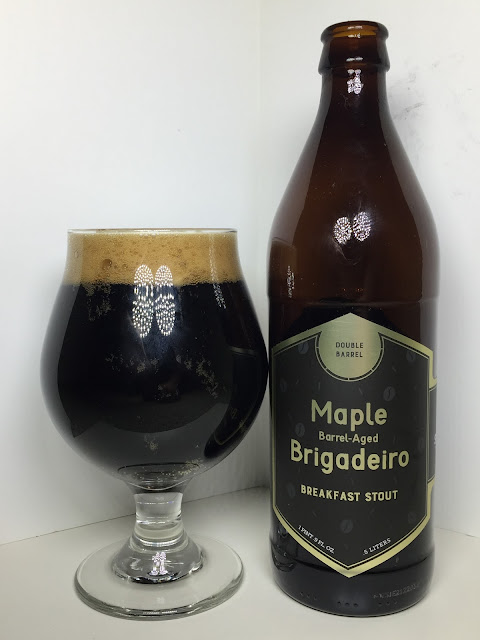 Pours pitch black and not even any hints of brown or red on the edges. Poured to two fingers of light brown head.

The aroma reminds me of the most decadent mocha iced coffee out there. Coffee is huge and there's a lot more oak than anticipated (but that's good). The sugary influence from the maple syrup is noticeable, but maple is not dominating and instead is enhancing other flavors. Some vanilla notes emerge as it warms, but like the non-BA version, the coffee is the star. I must note that bourbon is nowhere to be found. Maybe it accounts for some of the sweeter flavors, but as a standalone ingredient, it is lacking.

Coffee is the story here which is not surprising since it is a breakfast stout after all. It's creamy iced coffee up front and then bitter black coffee on the transition. The lactose is playing a bigger role than anticipated which is what's giving me that cream flavor. The maple is here, but like the aroma, it serves to compliment everything else rather than overpower with sugary sweetness. The maple and coffee work together wonderfully to really deliver a breakfast experience. It's really as simple as taking the base Brigadeiro and adding dashes of maple syrup. Sadly, like the aroma, there is no bourbon. I get it, this was aged only partially in bourbon barrels for three months, but I expected some bourbon in my glass doggone it!

Mouthfeel is full and creamy with a velvety body. The oats are making this a silky ride and drinkability remains high. While it is smooth, the mouthfeel comes up a bit thin considering it is nearly 9% abv. No alcohol to be found and despite being a breakfast stout, this would go great with dessert...or breakfast...I don't judge.

Maple Barrel Aged Brigadeiro improved upon the base beer by adding subtle notes of maple syrup to bring this breakfast stout full circle. I would have loved for there to be some bourbon in this, but one of the promised ingredients was M.I.A. Regardless of that, this was still a step above it's non-BA sibling and is a great example of what a breakfast stout should be.