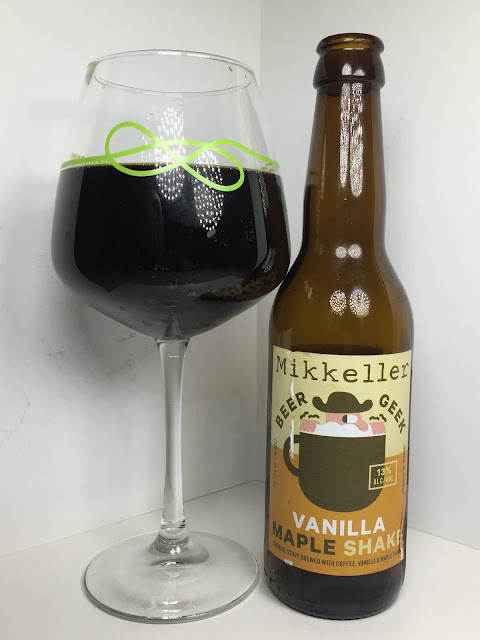 Not much of a brewer's description, but that just allows us to get to the beer faster!

Pours thick like motor oil into the glass and sits there black in color with some dark brown on the edges. No head to speak of and it kind of looks like flat Pepsi.

The maple syrup is erupting from the glass even when I sit a foot away. I've had a few maple beers this year and this is very close to the Angry Chair Woke in terms of getting blasted in the face with sugary maple syrup (I know a guy who will do that to you for $10...spoiler alert: It's me).I will also say that coffee is rather influential on the nose and a faint bit of lactose or cream is hiding in here too. As it warms, more vanilla emerges in the form of marshmallow and there's a roasted or even smokey malt quality as well.

The taste admittedly starts off with a small alcohol flavor and minor burn, but we can run over that easily. I get bitter dark chocolate as my initial impression and some burnt coffee grounds for good measure. The maple is surprisingly more subtle than expected given the intense aroma, but it is still big enough to be noticed and still retains its sugary sweetness. It took a little while for some form of vanilla to show up, and like the other flavors, it is subdued on the taste, but still present.

Mouthfeel is thick, but not viscous. It still manages to leave sticky residue, but the sweet flavors aren't cloying. Some carbonation is noticeable when held in the mouth. Aside from that minor alcohol taste, the abv is still held in check.

Vanilla Maple Shake had a superb aroma, but the flavors were dialed down a notch when it came to the taste. I'm not taking too much away from it in that regard as this still had a robust taste and made for an excellent dessert beer. It's a borderline diabetes inducer, so you should have a sweet tooth when taking this one on.