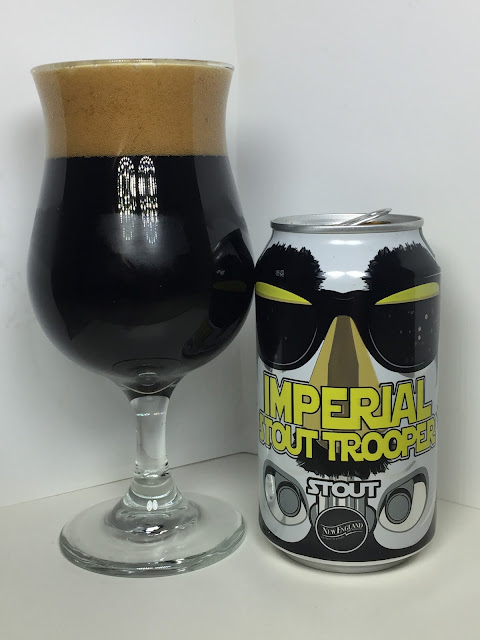 "Nearly a dozen types of malts and grains go into this FORCE-full, American Imperial Stout. Hints of coffee, tastes of dark fruit, and a subtle chocolate background make this Stout the perfect brew to welcome the Winter months. Brewed solely during the onset of the colder months, this one-time-a-year release will make you come over to the dark side... of beer."

Sits pitch black in the glass with just a tinge of dark brown on the edges. Two finger's worth of light brown head sat on top.

There's a lot going on with the aroma. A rush of fresh roast coffee and cherries come first, and the coffee is similar to iced coffee with vanilla notes. An almost oak and wood aroma is subtle as are roasted malts.

I apologize to people outside of Massachusetts and New Hampshire for this local reference, but this tastes like an Iced Mocha Madness from Honey Dew Donuts. I feel like I'm drinking a glass of chocolate milk and iced coffee rolled into one. It starts off with bitter coffee at the very front, but vanilla, and bitter dark chocolate emerge soon after. More of the cherries from the aroma come out too and even black cherries and an anise or black licorice flavor are present. Just when I think the dark chocolate is gone, another tidal wave of it comes in and floods my palate. It's almost unrelenting at this point. Not just dark chocolate, but fluffy, Three Musketeers-esque milk chocolate comes in to ease the more bitter components. Then there's a smack of vanilla tossed in for good measure along with a robust roasted malt taste.

Mouthfeel is thick, but fluffy and comfortable. The alcohol is nowhere to be seen. Drinkability is staggeringly high for nearly 10%.