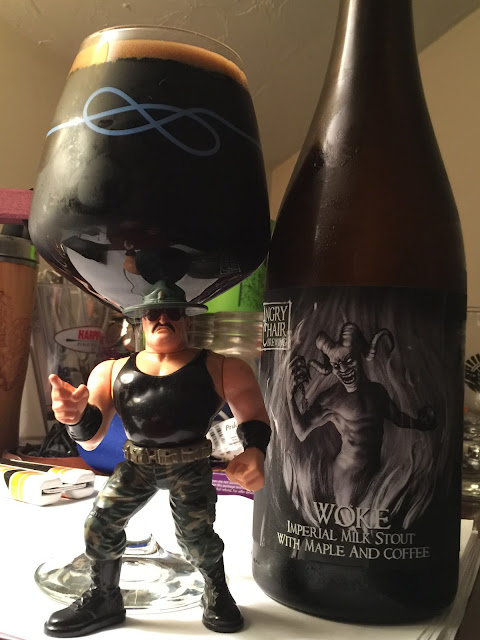 No real commercial description on this one, but if I may provide a small spoiler alert: When the beer is this phenomenal, you don't need one.

The appearance can get none more black as this one is lights out in all aspects. The pour produced half a finger of tan head.

Now if that ain't breakfast in a glass then I don't know what is. Massive, MASSIVE amounts of maple syrup on the aroma makes me wish I had a stack of pancakes to pour this on. Even more sweet flavors of vanilla, whipped cream, and chocolate syrup add to the confectionery overload, but I'll be damned if it isn't bring a huge smile to my face. Oh, and then there's the fresh roast coffee component to bring it all together. Seven thumbs up on the aroma alone.

The taste follows suit and what a glorious time it is to be alive. I will say that the lactose was missing from the aroma, but I definitely pick it up here as it accompanies each individual swig. This is nearly all maple everything and I don't think I've had a beer this maple-forward since Tree House Good Morning. Much like the nose, there's tons and tons of vanilla, marshmallow, and whipped cream in addition to a heavy chocolate syrup presence. It tastes like a chocolate frappe with maple syrup squeezed in. The coffee makes its return, but this time it carries a good amount of bitterness much like dark roast or black iced coffee. I think it's apparent by my previous ramblings that this is an incredibly beer, but it is surprisingly not too cloying and won't give you diabeetus.

Mouthfeel is thick and viscous, but also soft and cloudy. The sheer amount of maple surely gives this a sticky, lip-smacking feel, but it doesn't stop it from being easy to swallow. I can't find a drop of alcohol in this one and the heavy dose of lactose also doesn't hinder the experience.

Woke was one of the best maple-infused stouts that I have ever had. Not only were the maple, coffee, and lactose great additions, but that base imperial milk stout would be a winner on its own. Call it a breakfast beer, a dessert, beer, or whatever, but this was an amazingly delicious assault on my palate that few others have been able to duplicate. Mind bottling!