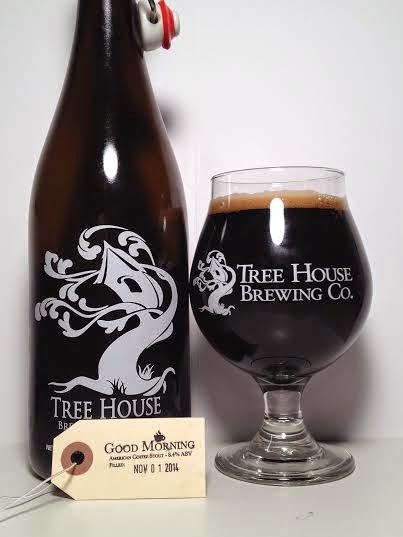 Good Morning is an imperial coffee stout brewed with maple syrup. Back in September, I was recovering from surgery and couldn't make it to Tree House for the first release of this beer. Last month I made a visit on a whim with a friend and Good Morning was just being tapped as I was waiting in line for my growler fills. The epitome of perfect timing.

Pours jet black with a finger of light brown head. No light coming through this thing.

Breakfast, anyone? Tons of dark roast coffee, some vanilla, hints of chocolate (or even cocoa powder), and it's all dowsed in maple syrup.

Seriously? This is like drinking pancakes with fresh maple syrup. It's very roasty like fresh coffee, some bitterness and there's some huge vanilla which I just love. I'm not sure of this was brewed with maple syrup, or if they just dumped an entire barrel of it into the final coffee stout, but the intense sweet maple flavor enhances everything else going on in this beer. Maple almost dominates over everything, but holds back just enough to leave room for all of the other flavors.

This is a thick, luscious stout which coats your entire mouth. Not a lot of carbonation, and you can't detect a hint of the alcohol at all.

Calling this "unique" is an understatement. The coffee stout base alone is already a great beer, but there's something about brewing it with genuine maple syrup that adds not only a level of complex sweetness, but it brings out other flavors and aromas and makes them explode out of the glass and onto your palate. Breakfast in a glass? Pretty damn close if you ask me as I could probably achieve the same results with a stack of pancakes covered in warm maple syrup and chased with a cup of coffee. If drinking was a socially acceptable activity for early mornings, then this would be my beverage of choice.