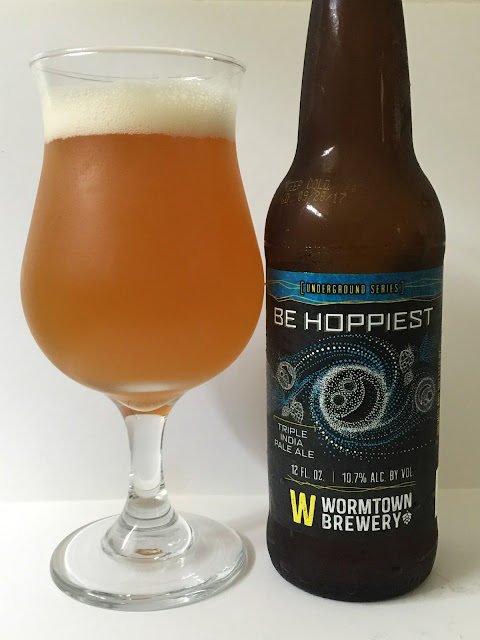 "Be Hoppiest Triple IPA is here. We originally created this recipe in honor of our 5th anniversary and the response was overwhelming. We add our hop forwarding process along with our mash hopping and double dry hop and hop back process to create our biggest IPA to date."

Pours a beautiful, hazy golden orange with a finger of white head.

The aroma is deeply resinous with sweet citrus. It has quite the hop bite on each whiff as it is just saturated with hops.

On the taste it is sweet up front with an emphasis on blood oranges, clementines, and peaches. In the middle of the mouth, some acidic grapefruit comes into play as does lemon peel. I can't explain it, but for some reason, I am getting a vanilla flavor to this. Maybe it is has to do with the sherbet and orange creme flavor, but this unexpected dessert feeling is more than welcome. The back end does a complete 180 as this turns real bitter, real fast. A dank, resinous hop flavor takes total control in the 2nd half with a dirty (in a good way), mossy, earthy flavor. At the same time, pure hop juice and citrus extract also chime in. It's a tale of two halves on this one, both both are superb.

Mouthfeel is thicker than most IPA's, but that's expected with 10.7%. Initially, the bitterness caught me off guard, but the more I drink, the more I got used to it. Hop heads will love it and the fruity, sweeter elements help with drinkability.

Be Hoppiest is my personal favorite out of all of the variations. It's a big bastard of a beer and is unapologetic about being so. The bitterness levels were off the charts, but at the same time, citrus-forward hops made the beer gentle on the palate. It's hard for a "Triple IPA" to retain high drinkability while smacking you in the face with hops and bitterness, but Wormtown has done it.