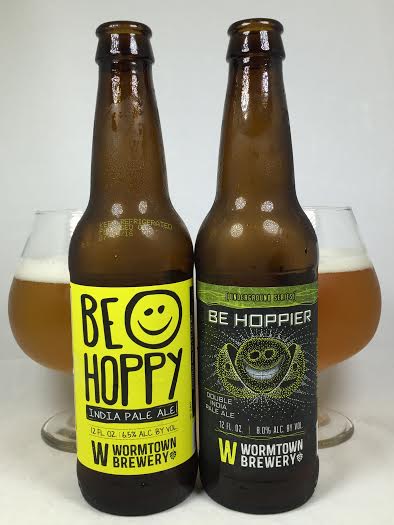 I love doing these face-offs. So, Be Hoppy is a Massachusetts darling beloved by all. Wormtown Brewery out of Worcester produces a wide array of styles, but their flagship IPA is their most popular. For me personally, I have a special relationship with this beer as it currently sits as my most checked-in beer on Untappd. 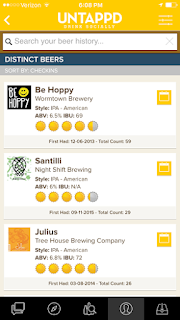 Clearly I have a love for this brew. So when I heard of an Imperial version of Be Hoppy, I knew it was a party I had to crash (because I'm not cool enough to get invited). I remember years ago when bombers of this stuff hit my local stores in small amounts, and to be quite honest, I do remember thinking that it wasn't special. Years have passed and maybe it will grown on me. What better way to see how it sizes up than to pit these two against each other in a fight to the death?

"Be Hoppy is our take on the Left Coast IPA. The huge aromatics and big citrus forward flavors come from the copious amount of hops we use during our double dry hop and hop back processes. Let our IPA put a smile on your face Harvey Ball would be proud of. Have a Great Beer!"

"What do you do when our Be Hoppy IPA isn’t hoppy enough for you? Seek out its award winning bigger brother. We add mash hopping along with our double dry hop and hop back processes to  create a hop bomb of epic proportions."

Noticeably darker in appearance with a rusty orange body which is also mostly hazy and produced a finger of white head.

Smells more earthy than your usual New England IPA's. It has tons of wet grass and hints of tree bark and pine. There's just barely a touch of grapefruit hidden in the back. It also smells very clean.

The hop oils and aromas are significantly stronger here. The tree bark aroma from Be Hoppy has turned into thick tree sap and there's a sweet malt aroma too. That grassy, earthy, wet moss is bigger and bolder and it has some candied orange too. Overall this is sweeter on the nose than its little brother with a bigger hop bite.

The flavors are all subtle, but there sure are a lot of them in this glass. The taste yields a fruitier presence than the aroma ever did as I get stronger grapefruit and splashes of mango and pineapple. Additionally there is a hoppy resin presence on the back with a little bit of that subtle pine from the aroma. Other hop varietals are lending some spicy notes and herbaceous qualities. It's actually more complex than I had anticipated, but also subdued enough to not overwhelm the palate.

I don't want to be cliche, boring, and just sound like I'm half-assing this, but the best way to describe the taste is just to say it is a stronger version of the standard Be Hoppy. Everything from the base beer is here, but just in bigger numbers. I think the pine tree component is significantly bigger here than on the other, but the other flavors, while also bigger, aren't light years ahead of Be Hoppy. As with the aroma, it is dominated by herbal and grassy hops with the fruity notes being limited to some sweet, candied orange and a minor lemon zest quality. The hop intensity and resinous character are noticeable with a nice, little smack in the face on the initial sip, but you get used to it as you drink.

Relatively calm feel with enough hoppy goodness left to stick to your tongue. The body is light-to-medium and its easy to drink despite the multitude of flavors.

The body is slightly thicker, but not syrupy by any means. It isn't as easy to gulp down as Be Hoppy, but for a DIPA with such a large resinous flavor, it isn't that bad. As I said before, you get used to the intensity and sweetness.

In a lot of cases where a brewery makes a DIPA version of one of their best IPA's, usually the DIPA edition will win out. Now, I'm not saying I don't like Be Hoppier. I think it is a great beer packed with flavor a good drinkability. Is it THAT much of an improvement? I would personally say no. I prefer regular Be Hoppy because while the flavors aren't as intense as Be Hoppier, you still do get all of the same flavors as the DIPA which didn't amplify them to the cosmic level that I hoped they would. I also find Be Hoppy easier to drink and is something I would (actually I do) have in my fridge on a regular basis. Be Hoppier did show how you can enhance a base beer, but it didn't do it by much. The DIPA is still good, but when it comes to choosing between the two, I am taking Be Hoppy.