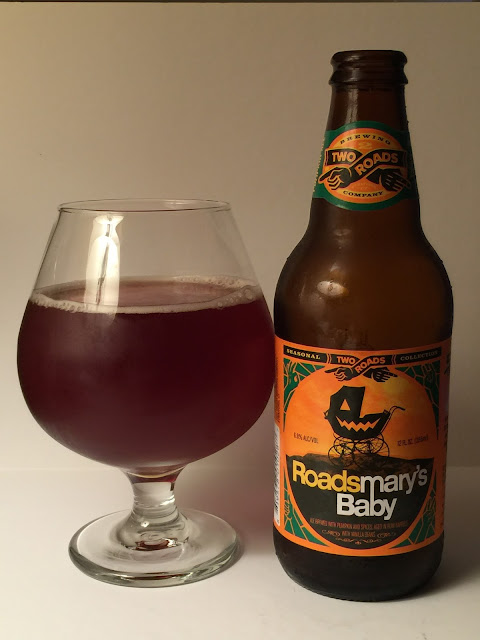 "Roadsmary’s Baby is a traditional pumpkin ale with a Two Roads spin, it's aged in rum barrels for added complexity and depth of flavor. The result is a smooth drinking ale with notes of pumpkin, spices, vanilla, oak and a touch of rum."

Pours burgundy in color with a copper glow and a slightly hazy body. The pour produced a finger of off-white head.

Cinnamon and nutmeg for days on the aroma with subtle rum character. A flower and potpourri aroma is powerful, but no vanilla to be found.

The taste retains the subtle rum from the aroma and adds some spice in for good measure. Sweet vanilla finally appears, but like the rum, it is faded and nearly a ghost. The cinnamon and nutmeg are the stars here as this tastes like a spice cabinet was emptied into the beer. Those familiar flowers and potpourri are back and they are just as big as the spices. Unlike the aroma, the taste yields raisins and dark fruit which seem to play off of the small bit of rum that was able to be found. I wish the barrel had more of an influence, but the pumpkin spices themselves are loud and proud.

Mouthfeel is light and calm with good carbonation. It finishes clean with no bad aftertaste and the alcohol is non-existent.

Roadsmary's Baby was a good pumpkin ale that did not deliver big on the barrel aging. Still, it is an acceptable pumpkin beer that is easy to drink.