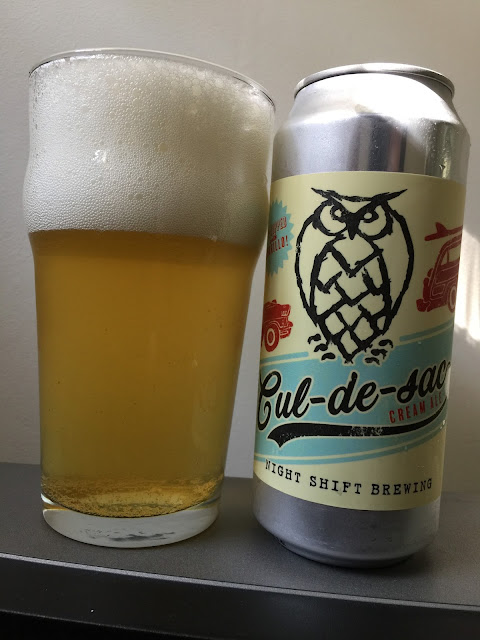 "Cul-de-sac is a cream ale, dry-hopped with Amarillo hops. Our brewers came up with a nostalgic, yet innovative take on the cream ales of yore - drinkable and smooth with a kick of fruity notes from the dry-hop."

The aroma is mild with subtle wheat and corn notes, but some lemon zest adds a refreshing touch.

A sweet corn flavor is accented by the (surprisingly large) dry hopping as notes of lemon and orange are far bigger that I had anticipated. The corn takes on a fresh cornbread flavor as opposed to being starchy and maize-like. Malts are bready and light without being too powdery or doughy. As it goes towards the back and on the finish, more of that lemon comes into play, but it comes dangerously close to being too artificial and shandy-esque, but luckily it is more refreshing and crisp rather than fake.

Mouthfeel is light, calm, and smooth. The Amarillo helps with the citrus and hoppy flavors and makes it easy to drink. Carbonation is decent, but not too high and the body does have a creamy texture.

Cul-de-Sac was a light and easy-drinking cream ale with a solid helping of Amarillo hops. The lemon flavor was a nice addition which helped the drinkability, but I think the base cream ale could also be released on its own. The smooth body was a big plus, but a little more carbonation would have been nice. This cream ale didn't have a generic, adjunct taste which elevates it above a lot of generic choices on the market.