Other Half & The Veil Coir Boiz 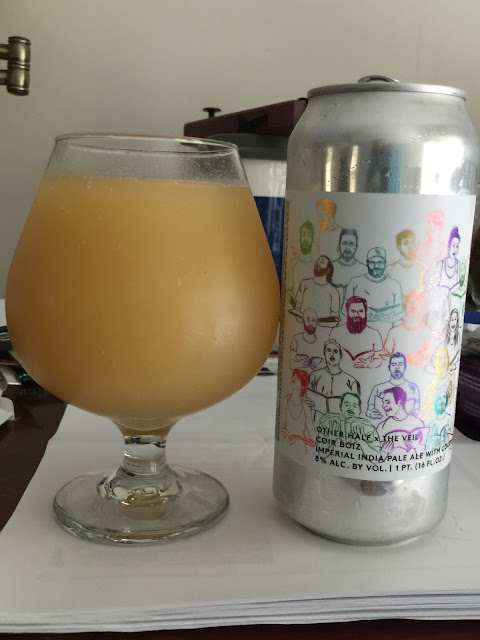 "Brewed in collaboration with The Veil Brewing is our tribute to hops and the connection between coconuts and hop farming. Hops are trellised with coir fiber rope which is made from coconut husk fiber so we decided to make an IPA with Citra and Nelson Sauvin hops aged on 400 lbs of coconut. Sing the praises of hops!!"

Pours a dark orange color with a turbid, murky body. There was a finger's-worth of white head, but it disappeared immediately like soda.

The coconut is overpoweringly sweet. Crack open a Mounds bar, take out the insides, make a line, and snort and you pretty much have the same experience. Just don't O.D. like Mia Wallace. Citra hops are hard to come by and I can pick up just a touch of the Nelson with some white wine and grapefruit. The coconut may smell artificial and sugary, but it does lend a pleasant toasted aroma to the overall experience.

The taste...well...I know this may not make sense, but this is what I uttered out loud after the first sip...
"It's not undrinkable, but I don't want to drink it"

Up front, that overly sweet coconut blasts me in the face like I'm Mia Khalifa and it leaves an aura around the entire experience. If I may go off on a tangent, I need to regale you with a tale form my childhood. As a child, my family took a trip to Florida. Needing sunscreen for our pale Irish skin, we picked up a bottle of this coconut-scented sun tan lotion. I recall the artificial, factory-made coconut agent as being especially putrid and offensive to the nostrils. As I got some on my face, I accidentally got some in my mouth. The harsh taste of this metallic, fake coconut stuck with me through the years and this beer oddly reminds me of that. Yes, the coconut tastes like sunscreen, but unlike the lotion, this probably isn't SPF 80 (I burn easily). I assure you I am not trying to be facetious for entertainment value, but this is the memory that was sparked. Now, if the beer uncovers a deeply-hidden memory of me being molested, then I will have a bigger problem on my hands other than subpar alcoholic beverages.

Anyway...to be blunt, the coconut is bad. Not only is it shockingly sweet, but it is metallic-tasting. Something just seems off and it doesn't have a very large redeeming factor. There is a small saving grace as the transition is remarkably noticeable with a second half that does manage to let the Nelson and Citra come through. Moments of white grapes, white wine, and orange sherbet are here and they almost try to pick up the save Goose Gossage style, but it was too little too late. Some more unpleasantness at the end with burnt, buttered popcorn coming out, but to the beer's credit, that inviting toasted aroma is back on the taste and it is another positive I can bestow upon this.

Mouthfeel is relatively smooth in texture, which I can attribute to the coconut. It does have lots of carbonation, which is not surprising given how it poured. The off flavors hinder the drinkability and it leaves a sticky aftertaste.

Coir Boiz didn't work for me. I got moments where I enjoyed the Nelson and Citra, but that coconut overwhelmed everything good and left destruction in its wake. These two breweries have produced good stuff on their own, but this joint venture was a swing and a miss. Sorry.

Email ThisBlogThis!Share to TwitterShare to FacebookShare to Pinterest
Labels: Imperial IPA, Other Half, Review, The Veil