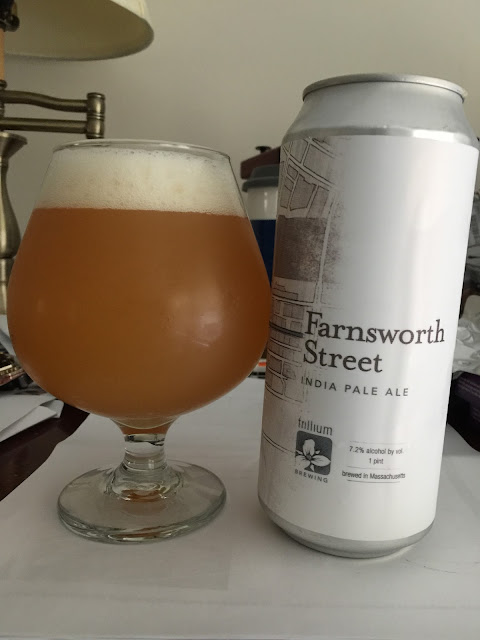 "We're so excited about our future Fort Point expansion that we had to make a new beer! Farnsworth Street IPA is the latest addition to our Street series of IPA's. With the same base recipe as our other street beers, we dosed Farnsworth with a new (to Trillium) hop: Vic Secret. Melon, orange, and a hint of zesty pine on the nose are followed by crisp, palatable flavors of orange creamsicle, pineapple, and cantaloupe. A dry finish and moderate carbonation round out Farnsworth Street. Cheers to our Fort Point roots and continuing to grow them."

Pours golden orange with a murky body and a finger of white head.

The aroma has lots of raw dankness which reminds me of Galaxy hops, but this has more acidity and spice. Orange sherbet and orange rind come at me next. Lots of fruity notes on the nose, but a flowery character is also noticeable.

The taste drops a lot of the dankness and goes back to being a nearly, straight-up, fruity IPA. Flavors of mango, pineapple, and lemon sing loud and proud, but they leave room for a solid malt presence which brings a balance to the beer. I think I get the lemon zest the most out of anything and it feels refreshing with each sip. The beer isn't relegated to just being a bouquet of fruits as slight amounts of bitterness, while not intense, are sprinkled throughout the experience. Further towards the back it is all orange rind and orange skin as opposed to fresh citrus.

Mouthfeel is solid enough. It isn't the familiar pillowy softness I have become accustomed to with Trillium IPA's, but it's still fluffy enough. No alcohol to be found and as I said before, it is quite refreshing.

Farnsworth Street is a welcome addition to Trillium's Street series. Knowing them, I can only assume the Double Dry Hopped version of this isn't too far behind, but for now, this Vic Secret IPA is light, soft, and refreshing, and I'll take that any time.