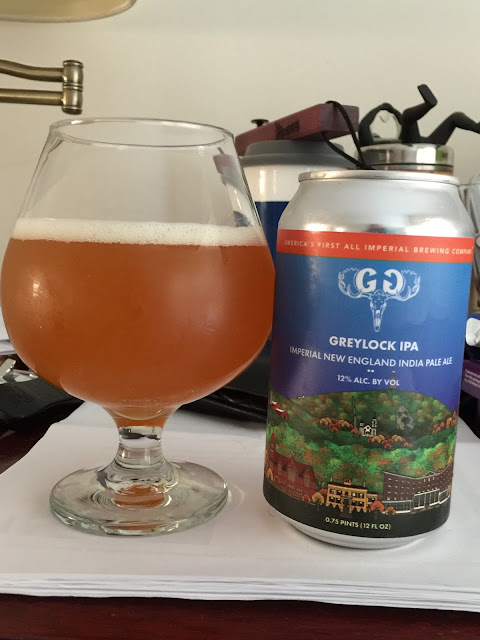 "New Englanders know a little something about India Pale Ales, so, we had to bring our best with Imperial New England IPA. The New England Style is a departure from traditional bitter IBU-packed IPAs. The New England focus is on the beautiful citrusy characteristics of the hops and how to enhance their qualities with every sip. Our Imperial New England IPA is curiously turbid and cloudy, with just the right hoppiness, big aromatics, and tasty flavor. We paired a special blend of sought-after Pacific Northwest Hops with traditional New England style yeast to give a deliciously juicy and floral Imperial brew that’s completely unfiltered, so your pallet will enjoy hints of fresh-squeezed grapefruit, orange and passionfruit with every sip."

Pours dark, rusty orange with a murky body and less than a finger of slightly off-white head.

The aroma is interesting with almost an apple cider quality. It borders on a watered down Scotch Ale with some toffee and caramel. Blood oranges and ruby red grapefruit are here too and it is influenced heavily by a big, wet, mossy, earthy hop presence.

I'm happy to report that this is surprisingly heavy on citrus and tropical notes on the taste. Like the nose, blood oranges, and grapefruit are here and they are much bigger than they were on the aroma. It's almost like a juice nectar or extract. Heavy, thick, hop juice and hop resin run wild, but it surprisingly doesn't weight me down and tastes pretty damn good. There's a touch of the aforementioned caramel and toffee in here, but it's not as big as it was on the aroma, and its subtlety works well with the sweet citrus and hop juices. A heavy dark, caramel malt presence packs a punch and it gets sweeter on the finish as more of the juice extract come out on each sip.

Mouthfeel is thick and sticky. However, I am having no issue drinking this one and the 12% is incredibly well-hidden, It's not even warm on each sip, which is an impressive feat.

Greylock IPA seemed intimidating at first, but the experience turned out to be a pleasant and delicious ride. Big hop oils and juices were a plus as were the Scotch Ale characteristics. The 12oz can was ideal for this Triple IPA and while maybe not the traditional "New England IPA" that we know and love, this one still fires on all cylinders.