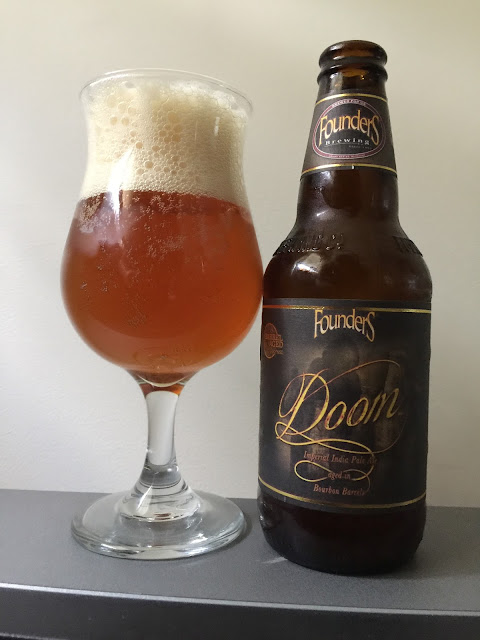 "Doom may be impending but that doesn't mean you have to fear it. A collision of worlds, the intense hop character of our Imperial IPA mingles with the warm vanilla and oak notes imparted from the time spent in our favorite bourbon barrels. Like all good things, Doom comes to those who wait."

Pours a dark, rusty orange with a slightly hazy, but mostly transparent body and a hefty three fingers of off-white head.

The aroma owes more to American Barleywines rather than Imperial IPA's. The hops are intense and there's an overall ice tea smell to this. It's piney and herbal at the same time and can be unrelenting. More complexity comes through with molasses and a refined alcohol presence. Some sweeter notes of candied orange and grapefruit are also here to help ease the hop overload. I can't really pick up the bourbon.

Hey, look at that, it's the bourbon! Fashionably late is better than nothing, I guess. Sweet bourbon up front, but it's not huge like it is with big BA beers. It is here to accent the flavors and just sort of kiss the DIPA. Along with the bourbon is subtle oak and sawdust with a noticeable, but not off-putting, alcohol taste. Overall this is a sweeter DIPA as caramel and toffee are coming out along with brown sugar and more of that molasses. I know I said it was American Barleywine on the nose, but now this is English Old Ale on the taste. That's not to say the ghost of DIPA past isn't lurking in the attic. Lots of pine and herbaceous mint and even incense capture my taste buds. Charred oak or tree bark and wet moss linger near the back.

Mouthfeel is thick, but not too syrupy or cloying. It's a massive beer at 12.4% and a sipper for sure. It doesn't have the smooth feel like a lot of traditional bourbon barrel aged beers, but the body is surprisingly calm with good carbonation. The alcohol is definitely warming with each sip, but it is not a burn by any means.

Doom didn't come off as a classic Double IPA soaked in bourbon. Instead, the barrel added many layers of unexpected complexity by reminding me of a multitude of styles. I don't think I'd make this a go-to IPA, but it's uniqueness cannot be ignored. Don't go into this expecting a traditional DIPA because you won't get it. What you will get is a mammoth barrel-aged beer with an array of flavors which compliment the hop bitterness from the base DIPA itself.