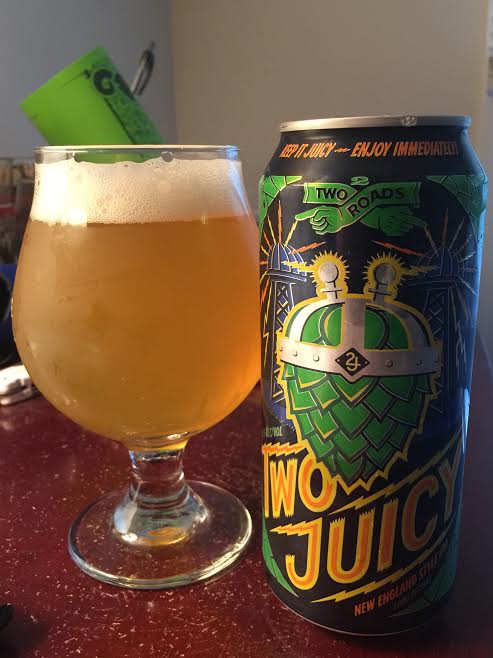 The aroma is a big splash of pineapple with earthy notes of wet grass along with some pine and spruce. Then there's some tangerine and juice extract for good measure.

With a name like "Two Juicy", I was expecting a tropical or citrus juice explosion or even a hop juice overload, but for me, I get a blast of earthy hops. Flavors of wet grass, moss, and tree bark are the most prominent in my opinion and is similar to walking through a forest after a rain storm. Now, juicy hops are still here of course. Pineapple from the aroma is back on the taste along with subtle lemon peel and some mango. I get more orange rind rather than any citrus juice and that's where the citrus influence comes to an abrupt end. As it goes towards the back, the flavors are more hop resins and oils and it has a bitter finish. Some good malt presence and a sweeter kick near the end lends some balance.

Mouthnfeel is calm with a medium body. It feels much lighter than 8.2%. It isn't an intimidating DIPA by any means, so even the casual drinker can approach this with confidence.

I'm not going to sound like the proverbial broken record and say I was expecting more juice from Two Juicy, so let's just say that while my expectations weren't met, I still enjoyed this big, earthy DIPA which was refreshing enough to be a complex and drinkable IPA.