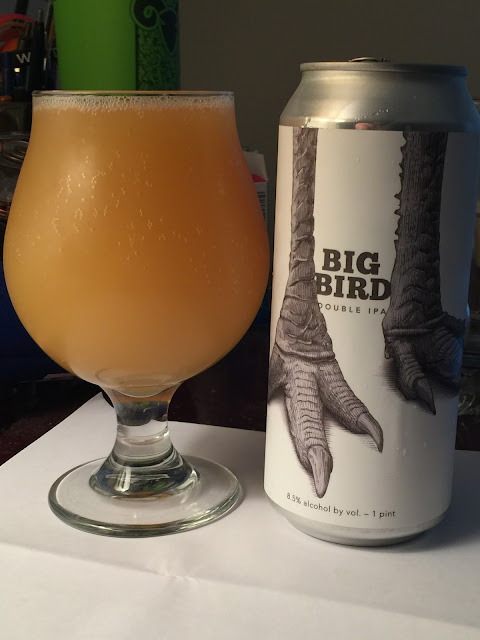 "Our "small birds" are a series of pale ales experimenting with combinations of adjunct grains and hop varieties to create seasonal, sessionable pale ales. Big Bird is a continuation of some of these experiments in an amped-up Double IPA form. One of the hoppiest beers we've made to date, Big Bird is featuring a new signature hop. This new hop gives Big Bird an intense nose that zaps the senses with aromas of lime, overripe papaya, and pithy citrus. Flavors of pineapple and tangy grapefruit are balanced by a light body and dank, resinous finish. Pumped up with hop forward flavor and weighing in at 8.5% ABV... there's a new bird in town, and this clucker is big"

Pours yellow in color with a murky body. I didn't get much of a head on this one despite an aggressive pour, but there was still plenty of carbonation bubbles in the glass.

Lemon, sherbet, and a musty, farmhouse aroma kick off this show. It has an abundance of hop oils, but it's not too saturated. There's even some spicy hop notes and some Nelson qualities of white wine and grapefruit. Wheat and rustic bready malts finish things off.

The taste has lots of acidity from both the oily hops and the aforementioned grapefruit and lemon flavors. The sweetness of that sherbet from the aroma is here and can lend a dessert-like feeling to this. I think the overall theme is intense bitterness. People throw the term "hop bomb" around, but I'd classify this as more of a Hop Oil Bomb instead. The dank, grassy notes take center stage and it really makes you realize that they weren't bullshititng about how much hops they used in this one. The combination of the sherbet, lemon, and grass works nicely and the constant bitterness will satisfy the hardcore audience. I don't think the casual drinker will find it appetizing, but veteran hop heads will be pleased.

Mouthfeel is full and creamy with no alcohol presence. Again, the bitterness doesn't make it an easy-drinking beer, but as an 8.5% DIPA, it hits its mark for sure.

Big Bird promised a ridiculous amount of hops and on that note it delivered. I wouldn't call it the most drinkable DIPA due to the barrage of bitterness and hop oils, but it has just enough of a citrus influence to keep you on the line while it reels you in.