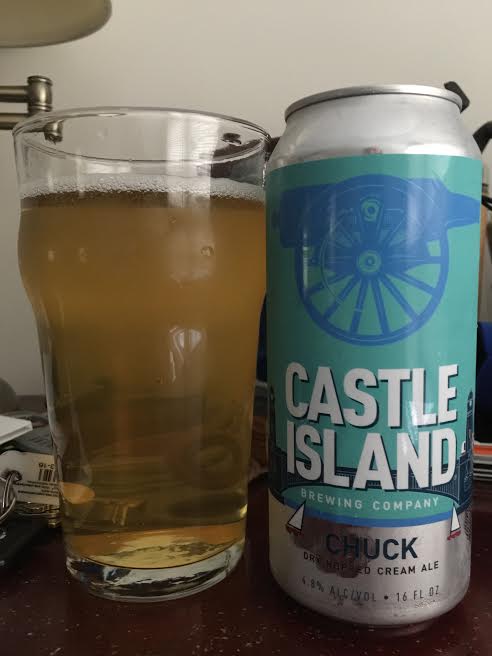 "Named in honor of the mighty Charles River, Chuck pays homage to the iconic Boston landmark by giving new life to a classic cream ale. Brewed with wheat and a touch of flaked maize, Chuck turns to peachy, piney hops for a big burst of fruity flavor, putting a new spin on this timeless style."

Pours golden yellow with a mostly transparent body (a bit of haze). The pour produced a finger of fizzy white head not unlike soda, and it disappeared almost instantly.

Pilsner malt aroma with corn and wheat. There's maybe a touch of cedar and then some doughy malts.

All my previous reviews of Cream Ales have been either imperial versions, flavored with coffee, or barrel-aged. This marks the first standalone Cream Ale (the closest to one, anyway) and it's pretty much what I expected and nothing much more.

The overall taste is similar to generic adjunct lagers (while this is not a lager), but the maize provides a moderate kick of sweetness which combines with the wheat for a sweet, cereal taste. The dry-hopping does actually lend some notes of citrus and lemon with more of the subtle cedar I picked up on the aroma. It's not a hoppy per se, but the hops are definitely noticeable. As it heads towards the back end, more of that wheat character tends to cut to the front of the line, but there is some room for more sweetness and a pinch of strawberry.

Mouthfeel is light and full of carbonation. It finishes clean on each sip, but the body itself, while calm, doesn't have much texture to grab on to. It is thin for the most part, but is on the verge of being watered down. Still, drinkability, thanks to the body and subtle fruity hop notes, is high.

Chuck avoided being lost in a sea of generic Cream Ales with its dry hopping that produced noticeable fruity notes and subtle hop bite. While still slightly ahead of the pack, this one still didn't do enough to distance itself enough in order to be special. It's perfectly suitable for the style and pretty much accomplished what it set out to do.