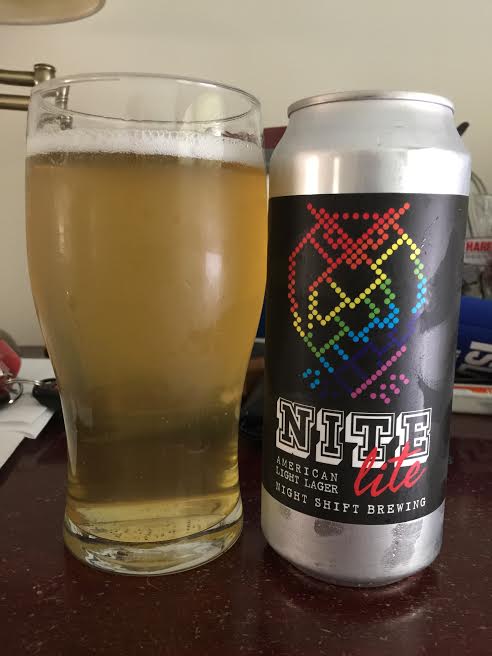 "To us, Nite Lite isn't just a beer - it's a state of mind. This American light lager is a relaxing reward at the end of a constructive day, or a refreshing reminder that the sun's always out somewhere."

Pours a lighter than straw yellow with a mostly transparent body. An aggressive pour yielded less than a finger of fizzy, white head.

The familiar smell of so many adjunct lagers are here, but then there's an apple cider quality too. It has a more refined grain smell than typical macro lagers, so it doesn't smell off-putting at all.

It's surprisingly sweeter than I thought it would be. I don't think malts play much of a factor into the recipe, but I think this is going back to the Granny Smith Apple aroma with the addition of some sourness. Wet grains and wet hay don't personally make me wet, but it's not offensive to my palate. I think a faint kick of berries and lemon juice add a modest refreshing character. The finish is a bit metallic and has an aftertaste filled with stale corn.

Mouthfeel is light and crisp with lots of carbonation. Again, the small level of lemon zest can make this refreshing from time to time. I just think that aftertaste can be a turn off, especially if you let it get too warm.

Nite Lite was like a drinkable Bud/Miller/Coors lager. The only thing it had in common with the popular macro beers was the finish, but aside from that, this would make a good transition beer for those just getting into craft beer.