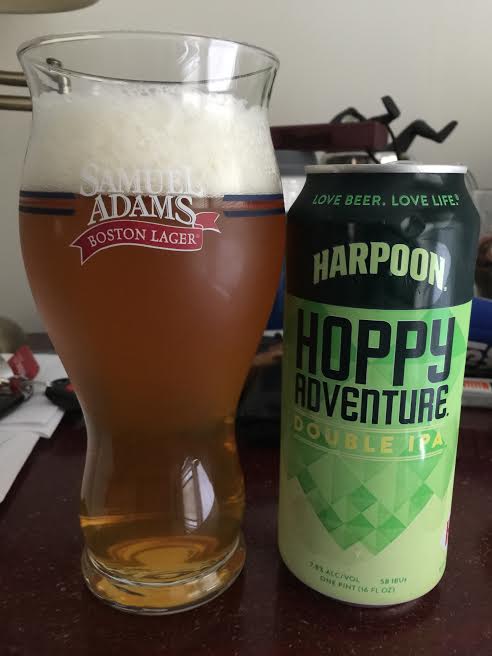 "In the fall of 2014, Harpoon brewers Ken Hermann and Tom Knight brewed a hoppy, citrusy, but not tire-out-the-palette-overly-bitter double IPA on our pilot system. The beer was put on tap in our employee lounge and at our Beer Hall in Boston and Riverbend Taps in Windsor. It became clear very quickly that this beer was too good to brew just once…so we brought it back. This flavorful, highly aromatic beer is exactly how Tom and Ken originally intended it to be – a very drinkable and approachable Double IPA."

The taste is very earthy. Mossy, wet grass and again with the tree bark and piney notes which are bound together with an overall sweetness. Pitted fruits, especially peaches and apricots, are the biggest factors into the fruity hop characters. Nothing too tropical or dank about this one as the malts and stone fruits are in the middle of a hostile takeover in my mouth. Though, I must say, the second half does kick in small amount of nectarine and clementine to add some splash of citrus. Still, that doesn't take away from the sweeter elements with the finish adding more malts and spruce.

Mouthfeel feels bigger than 7.8%. I would have put this in the 8.0%+ crowd if I didn't know better. As resinous as the taste can be at times, this isn't too thick or syrupy of a beer. The sweet flavors can push back, but experienced hop heads shouldn't have an issue.

Hoppy Adventure wasn't exactly a hop bomb, but it was a big and tasty DIPA. Stone fruits, pine, and sweet malts were a nice alternative to the hop and juice bombs out there, so for a change of pace it is great. However, I don't want to limit this to simply just being good for being different. Harpoon shows you there is more than one way to make a delicious IPA in New England.