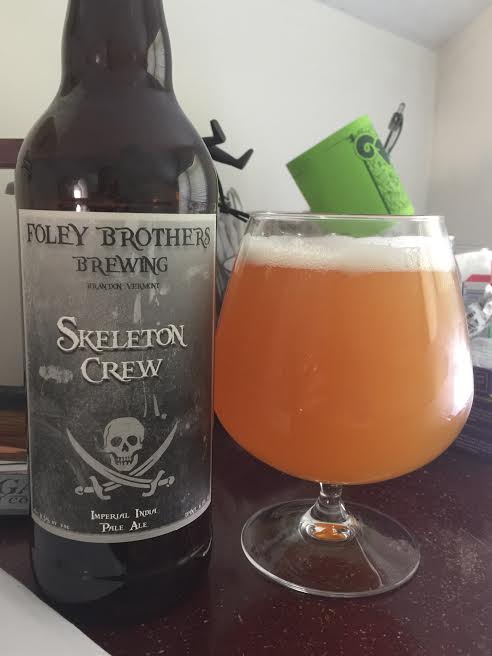 Ok, commercial description doesn't yield much, but it's supposed to be a massive Double IPA, so let's find out.

Pours a hazy, golden orange with a finger of white head.

Incredibly sweet and acidic citrus hops on the nose. Possibly some spicy hops here as well, which would explain the bite. I pick up quite a bit of the malts on this too as a rustic breadiness comes forward.

The taste has more in common with tropical West Coast DIPA's rather than anything coming out of New England. Like the aroma, it is almost overpoweringly sweet, but luckily it knows when to stop. Pure juice concentrate and a syrupy sweetness highlight the taste, but all throughout, this is a bitter bomb. I'm not saying that as a negative, but it's presence can't be ignored. Noticeable flavors of tangerines and mangoes add to the tropical side of things, but this is really all about the syrupy hop taste and feel.

Mouthfeel is thick as mentioned before, but it actually doesn't overstay its welcome. Syrupy for sure, but the good amount of carbonation moves the beer along nicely. It doesn't have that resinous taste or feel that can plague big Double IPA's and the sweetness adds to the drinkability.

What can I say? Skeleton Crew is a bitter bomb, a hop bomb, and a juice bomb all at the same time. This DIPA goes for classic West Coast sticky, tropical sweetness and it delivers. When I took the first whiff on the aroma, I was hesitant for the taste, but I've been sipping on this for the past hour or so and I'm liking it more and more with each swig. I think maybe my palate was looking for a change of pace from the milkshake-esque New England IPA's I have become accustomed to, so finding Skeleton Crew has been a pleasure. It's a big, flavorful, sticky, sweet DIPA that I can't shut up about, so no more ranting. Great beer!