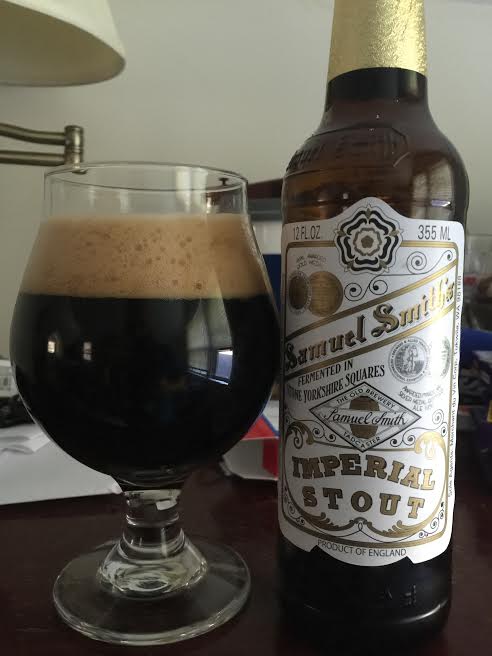 "This distinctive type of beer was originally brewed to withstand the abuses of shipping in foul weather to Imperial Russia. It was a favourite of Russian nobility whose taste for the finest food and drink was world famous. A rich flavourful brew; deep chocolate in colour with a roasted barley nose and flavour that is a complexity of malt, hops, alcohol and yeast. Fermented in ‘stone Yorkshire squares"

Pours completely black. No ruby red or brown on the edges as this one is truly black at heart. I got a nice, two fingers of khaki-colored head.

I am surprisingly blown away by the aroma. I thought this was going to be a straight-up Imperial Stout, but an absurdly huge cherry flavor knocked me on my ass and made think this was a RIS (upon further Googling, my hunch was confirmed). It smells more like a flavored stout with cherries and berries rather than a standard RIS, but I don't care. Behind that I get coffee, roasted malts, and even some vanilla. Definitely more coffee as it warms and then a K.O. punch of black licorice hits me on the jaw and leaves me lying on the mat.

The taste remains faithful to the aroma with anise and black licorice leading the charge, but with a nice kick of raisins too. Those cherries are back and keep this in check as a classic RIS. The warmer this gets, the more coffee comes out, but so does bitter dark chocolate. Am I getting a hop presence on this? Because I swear I'm picking up just the smallest touch of pine. A distinct British yeast runs rampant throughout with the raisins and even some plumb making a return for the finish.

Mouthfeel is relatively calm, but a big enough body to be called a stout. With a name like "Imperial Stout", you'd expect a full-on, mouth-coating experience, but then again, it is only 7% abv, so maybe it shouldn't be anticipated. It does leave enough residual taste to stop me from calling it "watered down", so I am happy with the body as is.

Samuel Smith's Imperial Stout is a tame "Imperial Stout", but still a bottle full of flavor. The overload of cherries and licorice was surprising for an RIS under 8%, but it made the beer taste and feel bigger than it actually was, which is an accomplishment in itself. It may dance the line between standard and Imperial Stout, but I'm just enjoying it for what it is, and that's a tasty, complex brew which is probably available at your local store and is just sitting on the shelf.