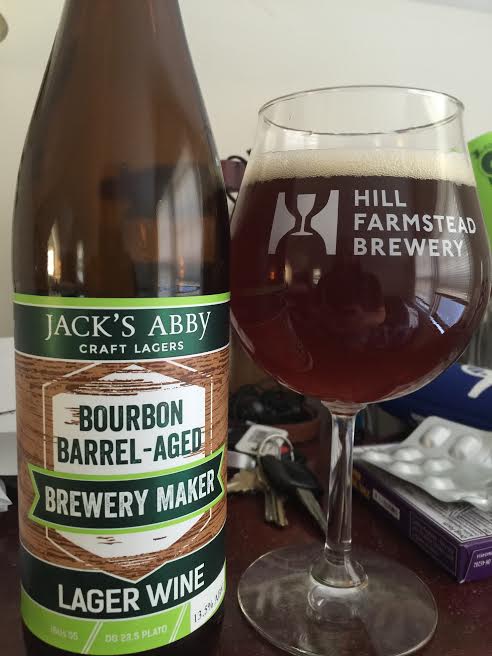 "While we were building our new brewery we were aging this beer in bourbon barrels previously used for our Barrel-Aged Framinghammer Baltic Porter. Lengthy aging allows the 13.5% ABV beer to mellow and develop a deep molasses-like sweetness with port-like dark fruit flavors. This beer is a sipper- you’ve been warned!"

Previously, I have reviewed Jack's Abby Baby Maker and Bride Maker (both made my Top 10 of 2014), but now we have the Brewery Maker sitting on my table waiting to be reviewed.

Pours copper/mahogany red with a clear body and a finger of eggshell white head.

The aroma is bourbon-soaked raisins and oak. Plums, figs, and a multitude of dark fruits are pushing their way to the front of the line and there's a leathery smell to this too. A strong malt presence is noticeable at every turn.

I'd say the taste follows the aroma almost brick by brick. The bourbon has influence not just in the sweet, sticky bourbon itself, but this has some good char and oak from the barrel with even some tobacco. The ensuing melee is a dark fruit parade of raisins, figs, plums, dates, and cherries. I think if you tossed a Fig Newton into a blender with some bourbon, then the results may be similar. I don't own a blender, so I can't try that, but if I can make that work with my Hamilton Beach waffle maker, then we got a story going. On the transition there's a flavor similar to red wine and lots of red grape, but that bourbon adds a big kick on the back end. Also bringing Pepsi and Ring Dings to the party are some candy-like toffee and caramel, which add give this a dessert quality that I was not expecting. I'm even getting a bitter dark chocolate flavor to this too. Damn.

This is a big beer, no doubt, but amazingly it isn't hard to drink. A sipper for sure, but there's no alcohol taste at all and the body, while nice and thick, has tons of carbonation to move it along.

Brewery Maker combined the best parts of Doppelbocks and English Barleywines and then threw them into a bourbon barrel to create a beautiful baby. Really well-done BBA beers do great jobs of masking alcohol while producing stellar flavors and this is no exception. You'll have to sip for an hour or two, but man it is a smooth ride. These "Maker" beers (I don't know what to call them) are one of the best series Jack's Abby has to offer. I have loved each entry and Brewery Maker has won my affection.