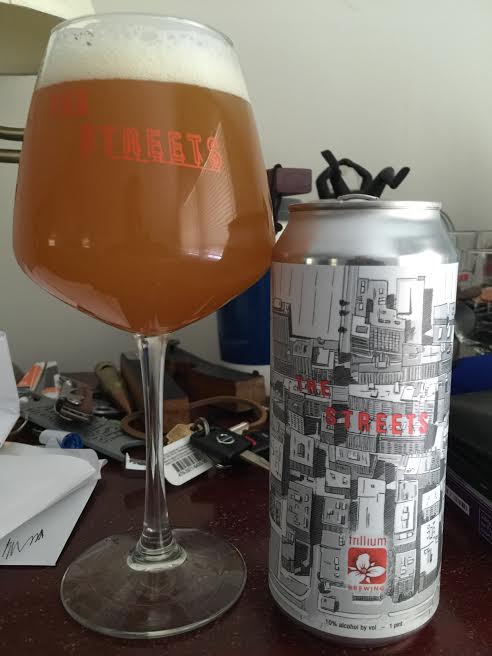 "For our 4th Anniversary, we wanted to brew something extra special and deeply rooted in Trillium's history. Congress Street was the very first IPA we brewed in 2013. Its success inspired an entire series of beers, all named after streets in Fort Point. Each of these beers uses the same base recipe featuring a different dry hop presenting a unique flavor with common ties. Building off of the Streets series, we decided to brew a beer that was a little bit of each. Using the same base recipe as all our Street beers, we dry hopped with Amarillo, Mosaic, Galaxy, El Dorado, Simcoe, & Nelson. The Streets Triple IPA is a celebratory culmination of all the Streets beers we've brewed over the past 4 years.

Hazy and orange in appearance with aromas of candied peaches and apricot, sweet white wine, lime, and orange zest on the nose. Followed by flavors of peach, stone fruits, and tropical culminating in a restrained bitterness. A soft, smooth mouthfeel rounds out the drinking experience of this surprisingly drinkable Triple IPA."

A nice busrt of fresh-squeezed orange juice is up front on the aroma. What I'm getting overall is highly acidic and oily hop resin. In the back are some apricots, peaches, and lime. It's not a hop or juice bomb out of the gate, but it works.

On the tip of the tongue, my first taste has some hop oils mixed with acidic citrus. While not as unpleasant as drinking orange juice after brushing your teeth, it still has a decent "bite" to it. Thankfully that subsides quickly with Mosaic leading the charge with dank hops and touches of black pepper and cedar. On a dime it switches to some dessert-like sweetness with sugar-sprinkled grapefruit and even some sherbet. A good amount of pure hop juice takes over in the second half, but those 3rd and 4th quarters have a remarkably bitter bite. It isn't saturated with hop flavor like Trillium's Heavy Mettle. That was a hop bomb where this, on the back end, is more of a bitter bomb. The transition itself actually has a solid Nelson influence with does of white wine and kiwi.

Mouthfeel has great carbonation without filling up your belly with gas. At times the body leans towards the syrupy side, but that hefty carbonation moves it along easily. There's a warming sensation present at times with just the faintest touches of alcohol, but it's understandable with a 10% Triple IPA. That being said, this is easy to drink.

The goal of The Streets was to combine all of the flavors from Trillium's Street series into one delightful package. I won't say it accomplished that goal to the fullest, but it did have a lot of flavors from the library of hops used. I found the citrus juices outweighed the bitterness enough to make this a solid addition to the Trillium lineup. For me personally, out of all the Trillium beers I have had and reviewed, this one was not my number one choice. It is still a remarkably drinkable and flavorful Triple IPA that you shouldn't hesitate to try.