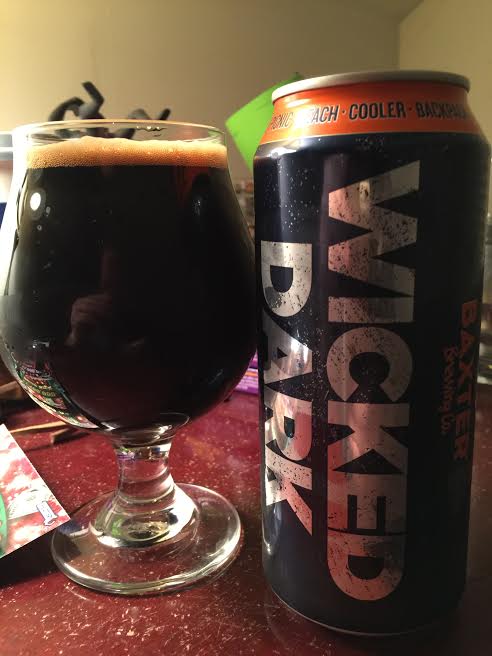 "With 12 malts — including barley, wheat, rye, and oats — this beer is a rich black masterpiece, booming with heavy malt flavors and a touch of warmth from the alcohol. We gave this beer extra time to mature in cold conditioning to allow the flavors to meld into the cohesive beast that is Wicked Dark. All this malty sweetness and alcohol needs balance, though, and that’s where lots of American and New Zealand hops come into play — Apollo, Millennium, Pacific Jade, Pacifica, and Horizon are a few of the varieties we used to do just that."

Lots of roasted malts and coffee on the nose. Hidden in the back is some dark chocolate syrup and black licorice with just a tiny kick of smoke.

I got an unexpected cherry flavor on the initial sip and the chocolate from the aroma was back in full force. It was like a nice cordial. The front is almost dessert-like in its sweetness despite there being no additional ingredients to make it taste as such. After that, the more traditional imperial stout flavors shine as roasted malts are incredibly robust as is dark roast coffee. All of those hops add an excellent bitter flavor which actually even lend some pine and citrus for even more complexity.

Mouthfeel is thick bordering on chewy, but it is never too cloying. More carbonation would help it from sticking to every inch of my mouth, but it's not ruining the experience. It's a monster of a beer at 10%, but you'll never find the alcohol and it's just a smooth ride from star to finish. A sipper for sure.

Wicked Dark is wicked awesome. These days, everyone is whoring themselves out to get their hands on the latest and rarest flavored and barrel-aged stouts. The challenge is finding a standard Imperial Stout that knocks your socks off and Wicked Dark is it. Imparting chocolate, coffee, roasted malts, and everything else that makes an Imperial Stout great, this is easily one of the best unflavored, non- barrel-aged stouts I've ever had. Grab a can of this black beauty and savor every moment.