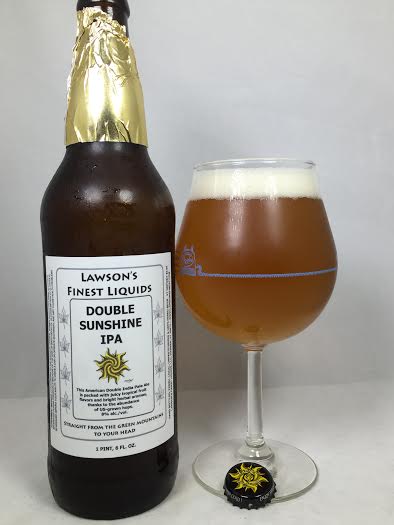 "This American Double India Pale Ale is packed with juicy tropical fruit flavors and bright herbal aromas, thanks to the abundance of US-grown hops."

My last trip to Vermont was in 2014 and I was able to pick up several bottles of Lawson's most highly acclaimed beer: Double Sunshine. Cracking it open for the first time had me apprehensive as I was certain the hype had far exceeded the actual product, but boy was I glad it was as good as advertised. I remember it being such a juice and hop explosion before breweries in Massachusetts were emulating the same thing. Recently Lawson's held their 8th anniversary party and Double Sunshine was available for purchase and I was lucky enough to snag a bottle in a trade. Unfortunately, I wish I had a DeLorean to go back two years and enjoy the beer I once loved.

Ok, right away the aroma is throwing me off. It's incredibly sweet as if it is made of 100% malts and there's some sort of caramel or butterscotch smell to it. There's maybe a touch of herbal hops and ripe peach, but this is most certainly not a hop-forward aroma. As it warms it smells like burnt firewood.

This is really weird like that Anthony Michael Hall movie about science. I would describe the taste as candy...like a butterscotch candy. I'm almost thinking the beer has gone bad, but it's only a couple of weeks old. After the initial overload of sweetness the grassy and herbal hops are back from the aroma, but they are more present on the taste. Aside from that small sliver of hope for a hop presence, the rest of the beer tastes like melted movie theater butter for your popcorn with some thick pine sap and dried pine needles.

Mouthfeel is where it should be for a 8.0% DIPA, but those odd flavors stick to my tongue for far too long. On the plus side there's no alcohol to be found, but drinkability comes at a premium with this odd duckling.

This is not the beer I remember so fondly. The first time I had this beer, it was a citrus bukkake, but now it feels more like a premature ejaculation of overly sweet malts. I'm almost a loss for words at how this beer (must have) changed over the past several years. I remember planning my trip to Vermont around this beer's release two years ago. Today, this is certainly not worth the work you have to put in to acquire it. It can't possibly be an expired bottle, so this must be how it's supposed to taste. What a letdown.