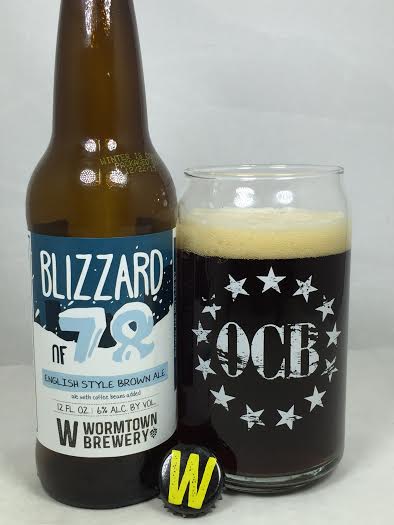 "The storm by which all storms are measured. Our winter offering pays tribute to those who were there and those who have endured hearing about it over and over again. We created a classic English Style Brown Ale with fresh roasted coffee beans added from Acoustic Java to give Blizzard of ’78 a rich, smooth character that you will enjoy when hearing more stories of walking through 27 inches of snow, uphill, blah, blah, blah."

Pours a dark mahogany red with two fingers of an off-white, oatmeal-colored head.

A tasty dark iced coffee flavor catches me first with some coffee ground bitterness up front. I'm also getting something similar to a smoky flavor which reminds me of a good porter. Beyond that is some of the aforementioned British yeast and then there's some toasted malts and a taste of multi-grain bread or Cheerios. On the back end and finish, flavors of raisins and figs come to life with a small dollop of the bitter coffee.

Mouthfeel is relatively calm with some noticeable carbonation, but overall it is smooth. There's no alcohol presence (not that I'd expect any) and there's no unpleasant lingering flavors to speak of.

In my experience there's not much you can do to make a Brown Ale exciting. While Blizzard of '78 isn't a panty dropper by any means, it is still a solid example with the coffee giving it an edge over other standard Brown Ales on the market. As memorable as the actual Blizzard of '78? No, but I'll still pick it up again next year.