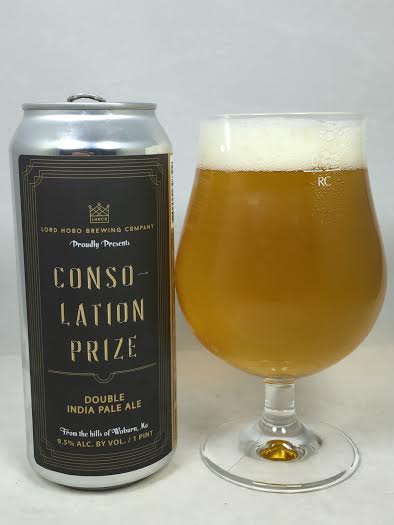 Lord Hobo is back on the blog with another DIPA. This one is their biggest canned offering yet coming in at an intimidating 9.5% Not much information is available and all I have to go on is the brief brewer's description of "Hoppy Ale, Big Juice Hops, Hints of Stone Fruit". Well, screw it! That's all I need to get this going.

Highly acidic lemon and grapefruit on the aroma with a deep resinous finish.

Dry, doughy malts are in abundance, but there's still some grapefruit peel and lemon zest to be found (although I wish there were more to counteract the dryness). The lemon is actually more shandy-like when the flavor initially hits and it can be quite refreshing at times, but then as it exits the malts make a return, but it's not a turn-off. Actually, as it warms, some lime zest comes through just enough to be detectable. The malts are most definitely sweet and they have an interesting contrast to the acidic fruit flavors.

Mouthfeel is surprisingly a tad lighter than I'd expect for a massive 9.5% DIPA. It's not even the fact that I anticipated something resinous and syrupy and it came up lighter, but I mean the beer falls closer to a standard single IPA. As I mentioned before, this tends to be dry at certain points, but some surprisingly refreshing hoppy flavors manage to even that out. Speaking of the abv that nearly makes this a Triple IPA, it is nowhere to be found.

Consolation Prize may not be the hop or juice nuke you want from a nearly 10% DIPA, but it did keep me guessing with the aroma and flavor combinations of resin, lemons, and malts. The hops were heavy on the acidity and the malts were sweet. I think if the mouthfeel would have been bigger (yes, I actually have to say that about a 9.5% DIPA), then this could have been a big winner. That's not me labeling this as a loser, but I think it should have been better than it was. Still though, it's a DIPA that won't annihilate your palate and does surprisingly go down easy.