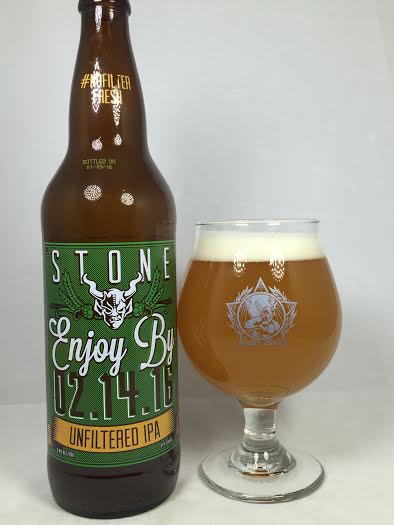 Ok, Stone Brewing, you have my attention. As I have documented, Stone IPA's and I get along as well as Donald Trump and Mexican immigrants (See? I can keep make this shit topical). My previous review of Stone Enjoy By was met with a less than lukewarm reception. When it comes to IPA's, the East Coast is just lapping the West Coast in every aspect. It seems like every brewery not in New England has adopted the unfiltered approach to IPA's, but I never thought Stone would join the crowd. Whenever I bought Enjoy By, it was never a consistent experience, but the best I could ever say about it was that it was "pretty good". So, when I heard they were releasing an unfiltered version, I knew I had to try it. I mean, how much could not filtering your IPA actually affect the smell and taste? As it turns out, the difference is night and day.

Oh, now isn't that a beautiful pour? I know people on my side of the country are used to the unfiltered appearance of New England IPA's, but I'm glad to see Stone make an attempt at it, and it looks gorgeous. A glowing, hazy orange with no visibility to the other side of the glass and it produced a finger of pure white head. 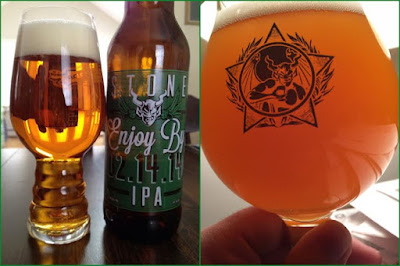 The aroma has a big, resinous presence with peach, tangerine, and some garlic/onion. Nice wet, dank hop aroma too.

The Enjoy By series has been plagued by an overabundance of garlic and onion, but with this version there is more fruit stepping forward with ripe peaches being at the front of the line. However, leaving the beer unfiltered has left in all of the hop oils and resins and they are just swimming around the glass without letting up. The hops used are leaving behind pure hop juice and biting resin as opposed to the East Coast which tends to leave behind all tropical juice. But you know what? This tastes great! An incredible amount of bitterness is present from front-to-back which even has attributes of dankness. The more it warms, the middle of the mouth picks up some more fruity notes of blood orange and even some mango. The finish contains a resinous bite that lingers for a few seconds, but doesn't leave behind a copper penny aftertaste.

Mouthfeel is tame for a massive 9.4% DIPA, but still has a slight (SLIGHT) syrupy body, but there is plenty of carbonation in this to move that along. The alcohol is masked beautifully and I don't pick up any heat or warming at all. It is noticeably dry, but given the abv and unfiltered status, this is forgivable.

Stone really impressed me when they said they were offering an unfiltered IPA and they nailed it. It's the same recipe as the standard Enjoy By that I did not think very highly of and apparently the only tweak they made was to leave it unfiltered. If that's all it took to convert me to a Stone IPA lover, then they need to do that to al of their IPA's ASAP. With such a big resinous bite, and an abv bordering on Triple IPA territory, this was still a delicious and complex DIPA that combined tropical juices and hop juices in perfect harmony. Easily my favorite IPA from Stone. If you want an alternative to the fruit juice-tasting IPA's out there and want more of a pure hop juice and hop resin taste, then this might arguably be the head of the class.