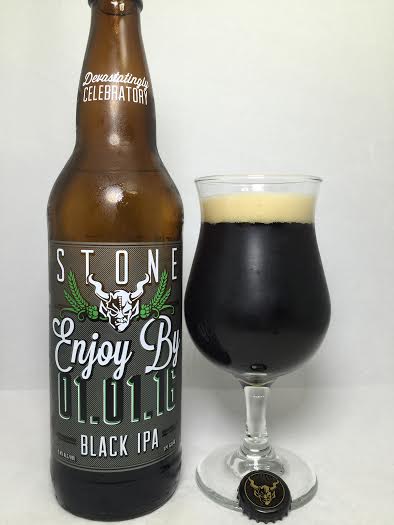 If you know me, then you know Stone IPA's and I don't get along. Maybe living on the East Coast with the abundance of delicious, unfiltered hop nukes has spoiled me, but I can't ever get behind most of the filtered, clear-bodied garlic/onion bombs coming from out West. Accordingly, the highly-regarded Stone Enjoy By series has also failed to impress me, but when I heard the Enjoy By series was going to step into Black IPA territory, my faith was renewed. To be able to strike the balance between hop juices and flavor with the roasty notes of a stout is an art. I really need Stone to deliver on this in order for them to keep me interested in their hoppy beers.

Sits pitch black in the glass and glows mahogany red when held up to the light. The pour produced two fingers of eggsehll-colored head.

Fruity hops on the nose with roasted malts. Reminds me of orange rind and dark coffee grounds.

Pretty much every Black IPA that I've ever had tended to lean more heavily on the roasted notes with supporting roles by hop juices. This on the other hand has switched the two as this is probably the juiciest Black IPA I've ever comes across while still maintaining the stout-like qualities of the style.

While orange on the nose, the fruits I get from the taste are peach and grapefruit, but the hops are still an hommage to the west coast with garlic and onion dankness, but not as overpowering.  As it warms, the roasted notes and dark coffee (especially some dark iced coffee) come front and center and are bigger than they were on the aroma. On the taste each side shares equal screen time where as the aroma had fruit juices at the front of the line. A lot of hop bitterness is present in the middle and on the finish, so in retrospect, the hops, bitterness, fruits, and roasted malts are all here and contribute at different stages. Good job all around.

With such a big fruit presence, I have to say the burnt coffee ground taste sticks to the back of my tongue and lingers for days. At times that kind of bitterness has me reaching for a sip of water, but I won't be writing a complaint to Stone Brewing any time soon. The beer itself is full-bodied for a big black double IPA (a BBDIPA if you will...*rimshot*). The 9.4% is nowhere to be found in the taste or the body as this isn't syrupy or even showing hints of a thick mouthfeel.

The standard Stone Enjoy By series has been met by me with mostly negative reactions. It depends on the batch, but most of the time I come away unsatisfied. When I head they were giving the same "Enjoy By" treatment to a Black IPA, I was fully on board and they did not disappoint. It's the fruitiest Black IPA I have ever had and it still reminds you of its dark roots with dark coffee and roasted malt presence. It's only in 22oz bombers now, but this, just like its standard Enjoy By brother, can easily sell just as well as a 6-pack and I would get it every time it came around my part of town.