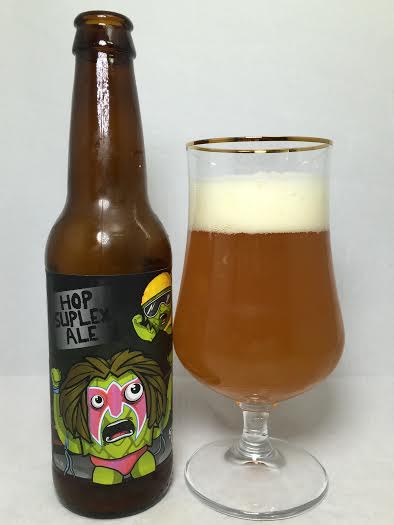 Not gonna lie, I picked this one up just for the label. I've never tried anything from Saucony Creek out of Pennsylvania, but this Imperial IPA that comes in at a whopping 10.0% and brewed with honey has caught my eye. The other DIPA made with honey that comes first to mind is Bell's Hopslam, which is a great beer in its own right, so hopefully this can match up with it pound-for-pound. Did you like the wrestling metaphor I used? No? Ah, gofuckyaself.

Pours quite beautifully with an extremely hazy (bordering on murky) dark orange body with less than two fingers of white head.

Strong resinous aroma with some orange rind, peach, and a splash of alcohol.

The Triple IPA tends to come with a taste of hop intensity so strong that it can either blow your hair back and make you scrape the hops off your teeth, or it will be a carpet bomb of resin that will have you wincing with each sip. Hop Suplex belongs in neither of those categories as the taste is coming off surprisingly bland.

Some subtle orange and citrus is noticeable as the beer warms, but instead of an onslaught of hops, the dank, resinous notes are what come through the loudest. Those fruity hops also contain a little bit of fresh grapefruit acidity and adds a slight sweetness to a malt-forward beer. The finish has a small kick (basically a punt) of east coast pine and tree bark, but not the fresh pine tree taste that a lot of hallmark IPA's from the Northeast have.

Mouthfeel is as it should be for such a big IPA. It's not a thick, syrupy mess and despite maybe the smallest tinge of alcohol warmth, there is no real alcohol taste. It also feels a little undercarbonated.

Hop Suplex isn't as strong or flavorful as most "Triple IPA's" as I found the flavors to be lacking for the style. More intense examples of the style are out there to be had, but this will satisfy if you're in a pinch. I wouldn't say it is worthy of the likeness of Ultimate Warrior and Randy Savage on the label. I think a more appropriate fit would have been maybe an Adam Bomb or The Booty Man.