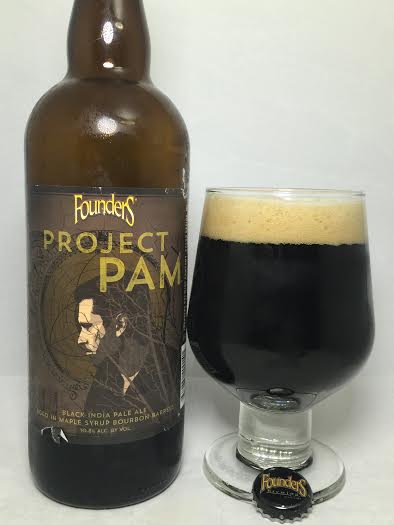 As I've said before, the Founders "Backstage Series" has been hit or miss. When a brewery devotes time and effort into a library of special offerings, it is not unreasonable for the general public to expect some amazing beers. So when I hear an imperial Black IPA aged in maple syrup bourbon barrels, I have lofty expectations. How can Founders possibly fuck this up? Well...let me tell you...

Pours pitch black with a finger of eggshell-colored head.

Alcoholic maple syrup smacks you in the face on the aroma. It's actually quite overpowering as it is dominating the small amount of roasted notes from the base black IPA.

Again it's the maple syrup bourbon barrel that takes control, but I can't help but feel that any genuine bourbon taste is actually here. As I said on the aroma, the maple has more of a spirit, alcohol taste which is more like flavored booze rather than flavored bourbon. If Dr. McGillicuddy had a maple syrup version, then this would be it. To be honest I could end the review right here. Other than the alcohol and maple, I get nothing else. There are no flavors to even indicate a black IPA exists. There's no genuine hop flavor, no roastiness, and no stout-like qualities to speak of. I mean, nothing tastes bad, but this is a one-dimensional beer from a series that prides itself on complexity and uniqueness.

Mouthfeel is pretty standard for a black IPA. It's full-bodied and there is no alcohol sting with no unpleasant lingering flavors.

I am severely disappointed in this entry to the Founders Backstage Series. When I hear about an Imperial Black IPA aged in maple syrup bourbon barrels, I feel I had the right to expect a superb offering. I've been sipping on this for almost two hours trying to find something that is just more than maple syrup schnapps, but it just isn't going to happen. Granted, this isn't a booze-soaked alcoholic mess as the maple is sugary and sweet, but there's no bourbon and the base black IPA is completely obstructed by the aforementioned maple spirit taste. It's by no means repulsive and hard to drink, but considering what I was expecting, this was just a big cock tease. I'm sorry, Founders, but this was the Mark Reynolds of the Backstage Series as it swung and missed on a record level. This might be the point where I lose faith in Founders Backstage Series...and maybe even lose faith in Christ himself...ok, maybe not THAT bad, but this is still a failure.