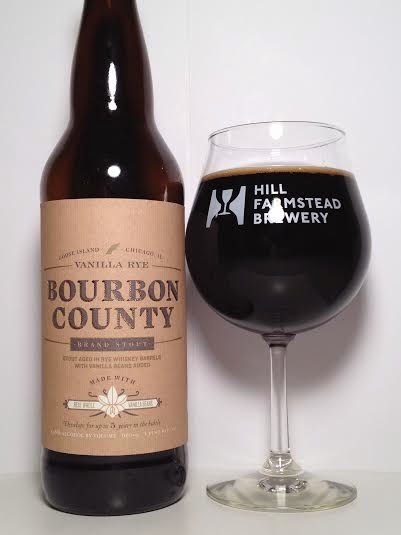 Well then what do we have here? I am writing this review on my 30th birthday (thank you) and when it comes to that special day each year, I always feel the need to bust out something exceptional. As many of you know, Goose Island releases their highly acclaimed Bourbon County Stout and its multiple variants every year on Black Friday. The standard BCBS is widely available, but it's other styles are harder to come by. Speaking for my area, we were COMPLETELY shut out of Bourbon County Coffee, but by the grace of God Almighty, one store got six bottles of Vanilla Rye. I got the very last bottle in stock and put it away for a special time.

Four years ago Goose Island brewed and released the Bourbon County Vanilla Stout which is standard BCBS with vanilla beans. Vanilla Rye is slightly different as it is aged in Rye Whiskey barrels with a blend of Mexican and Madagascar vanilla beans.

Pours pitch black with no light getting through this thing at all. An aggressive pour produced less than a finger of dark brown head, but it disappeared quickly.

Is it weird to say this smells smooth? The whiskey barrel is big and bold, but it's not an overpowering, in-your-face bomb. The vanilla pops out of the glass and even smells like melted marshmallows or even Fluff. Some subtle wood and chocolate too, which combined with the marshmallow, could make you think this is Bourbon County Mallomar. Side Note: They need to make THAT happen.

The first thing I taste is a fluffy vanilla, almost like genuine whipped cream. The middle of the tongue is overtaken by the whiskey barrel. I've had whiskey-aged stouts that tasted like thick, black licorice, but this is nothing like that. The barrel-aging is subtle, but strong at the same time - it has a nice balance. A big concern going in was whether or not the vanilla would be too sweet, and this is where I pick out my flaw with the beer. I wouldn't say it has natural vanilla bean taste, but rather a vanilla extract that comes off as slightly sugary and syrupy. Maybe a slight roasted malt and oak taste, but they're barely there.

It has the same viscous mouthfeel a barrel-aged Imperial Stout should  There is a slight alcohol taste and warmth in my chest, but that can be forgiven for such a big beer. The vanilla clings to the back of the tongue, but it's nothing unpleasant. This is actually rather sticky on the lips (get your minds out of the gutter) and is reminiscent of the lip-smacking sensation of having maple syrup.

Vanilla Rye's attempt to improve on the standard BCBS is a mixed bag of sorts. The addition of vanilla beans brought a desert-like component to the table, but it was slightly overly sweet with that aforementioned vanilla extract taste. The whiskey barrel was just as smooth and delicious as bourbon barrels are to BCBS and while it had a more noticeable burn than BCBS, it was not a deterrent. In my honest opinion, I think the vanilla here was a little too sugary and might benefit from a year of aging. This is till a great Imperial Stout, but not exactly a perfect whale, bro. I'd actually go with standard Bourbon County over this.