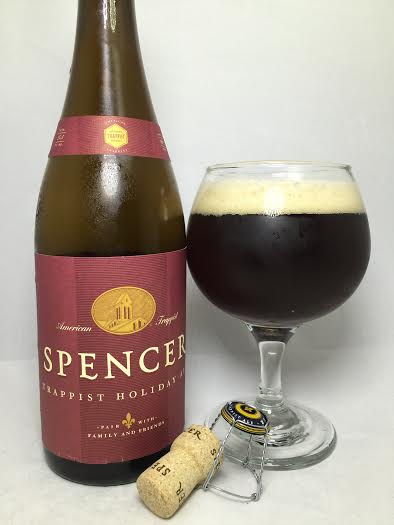 Last year, the first certified Trappist Brewery in the United States opened its doors in Spencer, Massachusetts. The monks committed themselves to brewing one beer which is the Spencer Trappist Ale - a Belgian Blonde Ale. Those from the state have been wondering if the Spencer Brewery would ever expand into other authentic Belgian styles. I am not sure if this is a guaranteed sign of things to come, but at least for this winter, they have bestowed upon us the Spencer Trappist Holiday Ale which a big Belgian Strong dark Ale coming in at 9.0%.

It looks black, but is actually a dark ruby red with two fingers of off-white, eggshell head.

A blast of cinnamon greets me on the aroma along with raisins, plums, and figs. Some nice cherry (not tart) too.

Those dark fruits are here in full force and are reminiscent of a solid Belgian Quad. It's also sweet, but not sugary or artificial. I actually get almost a rum-like taste when combined with the alcohol. Cherries and plums are the boldest of the dark fruits and there is also an unexpected dark coffee and maybe even dark chocolate taste to this too. I don't think this is made with those ingredients, but somehow they are in here. There's some leftover cinnamon from the aroma and even some nutmeg.

Mouthfeel is full and boozy, but in a good way. This makes full use of its 9.0% with a full body and a fair amount of carbonation to move the abv and rum-like qualities along the palate.

Overall this is a bold Belgian Strong Dark Ale, but I enjoyed it more than others with the sweetness of the rum-like taste and the cinnamon and nutmeg spices. A big bastard of a beer you need to sip on for an hour or two, but this Belgian ale is a great 2nd member of the Spencer Brewery family.