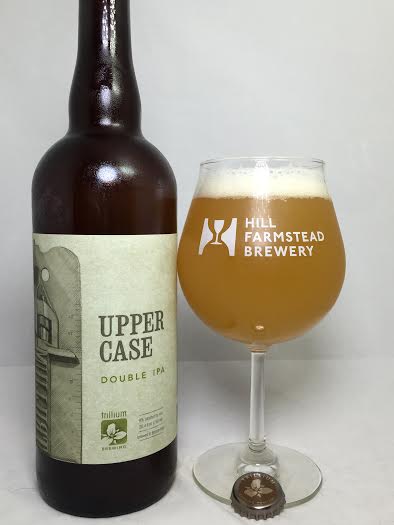 Brewed for their 2nd anniversary back in March and released during the weekend of Extreme Beerfest in Boston on March 21st, Upper Case quickly gained notoriety as one of the best IPA's Trillium had to offer. Word quickly got around over the past few weeks that a new batch would be released and on Saturday, October 3rd, Trillium busted the doors open for another Upper Case release. I followed the release on Twitter and Facebook to get updates on the case count throughout the day. I don't know how big a batch they produced this time around, but they allowed a 12 bottle limit and it sold out within one day. I made it to the brewery one hour before close and was there to see the last cases up for grabs before triumphantly claiming a few bottles of my own. Uppercase is a double IPA brewed mainly with Mosaic hops, but also with Citra, Galaxy, and Columbus. I've had so many Trillium IPA that utilize these hop varieties and they've all been stellar, so I have lofty expectations for this one as well.

Pours like the archetypal Trillium IPA with a dirty, unfiltered, glowing orange body that looks like a frappe. The pour generated two fingers of white head.

The taste follows the aroma almost to a T. Some pulp-filled orange juice and creamy orange sherbet are what stands out the most. An interesting combination for sure, but delicious nonetheless. After that there is a lot of bitterness from the Galaxy and a slight dank quality from the Columbus. It's juicy with some grassy notes and even the smallest bit of pine too. The finish has a tinge of breadiness and some of that pilsner malt along with more of the juices and dank hops.

In terms of mouthfeel, this is a 9.00% double IPA, but this is not syrupy or resinous in the least. It drinks like a standard, single IPA, but the body is medium and full. Referring back to the abv, there is absolutely no alcohol presence at all. It's almost scary drinkable for the style. The hop bitterness is what lingers most, but it flavorful and delicious and not too dank or wet.

Upper Case is another notch in Trillium's belt of superb IPA's. This brewery has the uncanny ability to combine fresh hop oils and bitterness with tropical juices that so few breweries can replicate. There's something about Trillium that is truly special with their hop-forward beers and Upper Case is another elite example of such a thing. Super drinkable for 9.0% while also having tons of fruity juice flavor and dank hop qualities. I give it seven thumbs up!