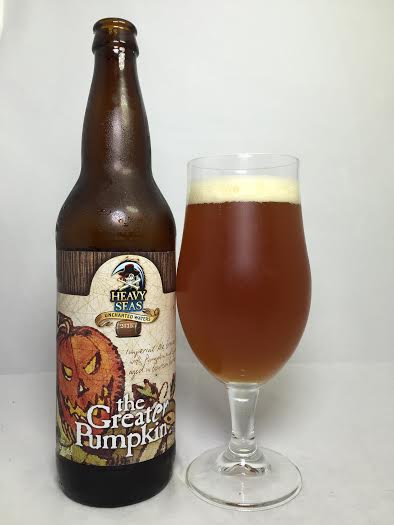 I've had pumpkin porters aged in bourbon barrels, but never a traditional pumpkin ale. Heavy Seas The Greater pumpkin is a massive pumpkin ale clocking in at 10.00% and was aged for an undisclosed amount of time in bourbon barrels. What period of time and what barrels did they use? Well, it is nearly impossible to find that information, but let's let the beer do the talking.

Pours a hazy dark orange bordering on amber. I can't see a thing through this beer. The pour produced two fingers of a slightly off-white head.

The nose is subtle with cinnamon, pumpkin, and a tiny bit of oak from the barrel. No bourbon on the aroma.

There's something off about the taste. In the front and middle is what I would best describe as alcoholic squash. There was no bourbon on the nose, but some sort of spirit has made its presence known on the taste with a spicy flavor and a little bit of a sting. Cinnamon is the most prominent of the spices with a small supporting role by nutmeg, but it's not all that bold. The spirit flavor combined with spices give this a rum-like taste despite claiming to be put in bourbon barrels. As for those barrels, I swear I can't find any bourbon no matter how hard I try. Highlights would be a pumpkin puree flavor that is just as good as any other standard pumpkin ale, but it tastes genuine and not artificial. The finish retains the alcohol taste and it is noticeable, but only for a split second before vanishing into the night.

I was anticipating a fuller body for a 10% barrel-aged beer, but the feel is similar to any other pumpkin ale on the market and is thin for an imperial ale. Lots of carbonation bubbles and some lingering residual alcohol round things out. Despite some alcohol sting, it goes down just as easy as any ordinary pumpkin ale, but the abv should have you treading carefully.

The Greater Pumpkin had big ambitions, but it did not reach its potential. This drank more like a run-of-the-mill pumpkin ale rather than a big, bold barrel-aged beer. A lack of barrel character and a thin mouthfeel hurt this one, but as a standard pumpkin beer, it actually works nicely. I think taking the base beer and putting that in six-packs would be beneficial for Heavy Seas as that could compete with all of the other pumpkin beers on the market. The lone 22oz bombers claiming to be bourbon barrel aged just won't cut it in my own humble opinion.