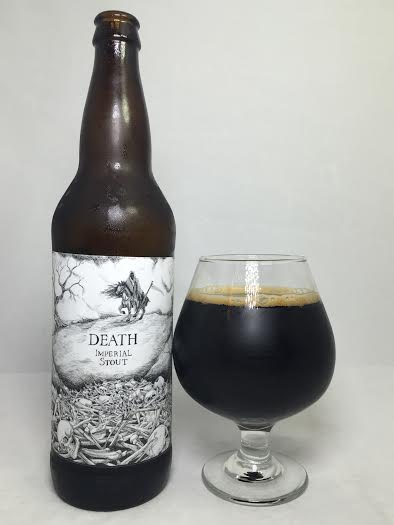 Part of the Backlash "Apocalypse Series", Death is a big Imperial Stout with not a whole lot of information available on it. Backlash is more known for its hoppy offerings and I believe this marked the first commercially available stout from them.

Dark as night on the pour with a some dark brown on the edges. It produced a finger of tan/khaki head.

The aroma is sweet and roasty with black coffee, vanilla, licorice, and a tiny amount of chocolate syrup, cherry, and dark fruits.

Initially on the first sip, the bitter, dark coffee smacks you in the face. The roasted malts are significantly bigger here and they have almost a smoky quality to them. Like the aroma, the roasty and sweet flavors share equal time on stage. The middle transitions to dark chocolate and dark cherry and a familiar iced coffee taste. The finish has a lingering black licorice for a nice change of pace, but there's also a malty aftertaste that refuses to go away and makes the finish good instead of great.

The mouthfeel is an interesting mixed bag of sorts. When it first hits your tongue, the immediate thought if soft and fluffy, but almost instantly it vanishes. As a 9.00% stout, I will say that it isn't as thick and viscous as others of the style and abv. It isn't quite as thin as a milk stout nor would I ever dare say it is watery, but it is noticeably not as mouth-coating as it should be. Speaking of the abv, the 9.00% is nowhere to be found and there isn't even warming in the chest on each sip. It's smooth throughout and easy to drink.

Backlash Death has a lot of great qualities that a standard, non-flavored, non barrel-aged stout should have. An even combination of roasty and sweet along with a smooth texture and easy drinkability put this ahead of a lot of other standard Imperial Stouts. Some points are deducted for minor transgressions, but they can easily be overlooked and the beer can be enjoyed for all the good it has to offer.