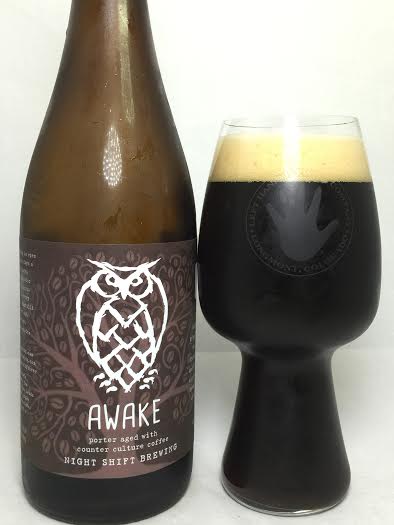 Night Shift has been killing it recently with their hoppy beers such as Whirlpool, Morph, and Santilli, but they also make some delicious dark beers. Awake is a big porter coming in at 8.70% and is brewed with Counter Culture Coffee.

Sits nearly pitch black in the glass, but you can see dark brown on the bottom, top, and edges. The pour produced two fingers of eggshell head.

Obviously massive coffee on the aroma, but also some cocoa powder and vanilla (a lot of vanilla). The base porter's dark roasted malts are also inviting.

Big bitterness from those dark malts hit the front of my tongue first followed by wave after wave of coffee. The vanilla was quite big on the nose and while it is here on the taste, it isn't equal to the aroma. Some nice cocoa bean flavor and even milk chocolate or chocolate syrup is really turning this from a coffee porter into a sweet dessert beer. The finish goes back to the bitter dark malts, but they aren't unpleasant and they don't linger.

A big porter at 8.70%, it does tend to feel a little thin, but still robust enough to remind that it's a big beer meant to be taken seriously. Not a lot of carbonation as it leans more towards a velvety feel with only a slight feeling of mouth-coating. A sticky sensation stands out after each sip, but it's nice and sweet.

Awake is a better-than-average coffee porter. It adds some sugary chocolate and vanilla notes to a great base porter without being cloying or overly sweet. Frankly, coffee porters are a dime a dozen, but Night Shift's interpretation is bold and dessert-like which adds enough complexity to make it worth your while.