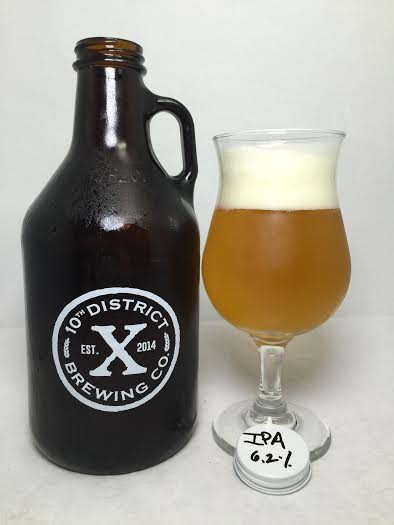 It's always fun to find out when there's a brewery in your own backyard. I don't mean that literally, but a brewery located in the suburbs of a small Southeast Massachusetts town comes as somewhat of a surprise. Not to mention, I drive by it frequently and never even knew it. 10th District Brewing has been open for about a year and you won't find any fancy names for their beers either as what you see is what you get. On my first visit, I opted for the IPA which is brewed with no less than eight hop varieties including my personal favorite, Citra. 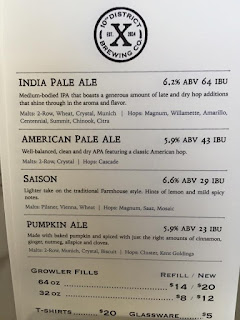 Earthy and grassy on the nose with the smallest hint of acidic grapefruit and spices.

I get a lot of bitterness on the taste. The hops are grassy and herbal and seem to be the most dominant characteristics coming through. As the beer warms up, a nice refreshing lemon zest starts coming through which saves the beer from just being a bitter bomb. This is also noticeably spicy as Summit hops are trying to overtake the palate and are actually succeeding at times. The spices and grass combine forces on the finish which makes for an interesting and drying aftertaste, but a late splash of orange comes flying into make the save and adds a touch of sweetness.

For an IPA over 6.0%, this is actually comes in a little thin with little body. Disappointingly there seems to be a lack of carbonation, but I wouldn't say it is flat. As I said before, this can leave the mouth a little dry, but on the plus side, there is no alcohol presence to be found.

10th District's IPA, despite an abundance of bitterness and grass, did actually manage to pull off a lot of flavors from every one of the hops used. Maybe I've gotten too accustomed to so many New England IPA's being massive juice nukes, but this was a tad too grassy and spicy for my liking, but I recognize the effort that went into it and it will definitely satisfy lots of people.