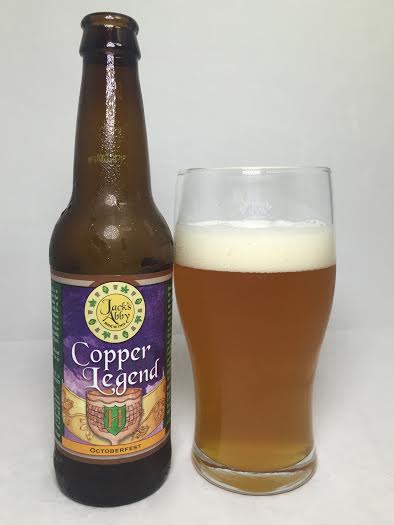 Oktoberfests used to be the dominant beer come the Fall, but pumpkin beers have seemed to have usurped them as the king of Autumn. I've recently tried immersing myself in the Oktoberfest style and I figured a local favorite would be a nice place to dive in.

Aroma has a crisp lager scent with sweet caramel notes.

The taste has a lot of sweetness - particularly of toffee. Right after that is the aforementioned caramel from the aroma. The label says it uses Noble hops and I can detect some spiciness throughout, but also something similar to beeswax or honey right off the comb. The back end has almost an herbal, green tea, or even fresh mint kick to it. It might be weird to say it tastes like autumn, but that's what I'm going to go with. Some light crackery maltiness is also here to finish the job.

Mouthfeel is a little under carbonated, but not exactly flat. It doesn't give the beer a syrupy texture either, but it does come out feeling lighter than its abv would suggest. In any case, it is still robust enough to be highly flavorful and highly drinkable.

Copper Legend is a solid entry into the Oktoberfest world, but as a brewery that specializes in lagers, I expected a little more from Jack's Abby. Oh, I'll gladly throw multiple bottles back on a cool Fall day, but I can't help but feel it didn't reach its potential. However, this is still packed with flavor and goes down smooth. Can't ask for more than that.