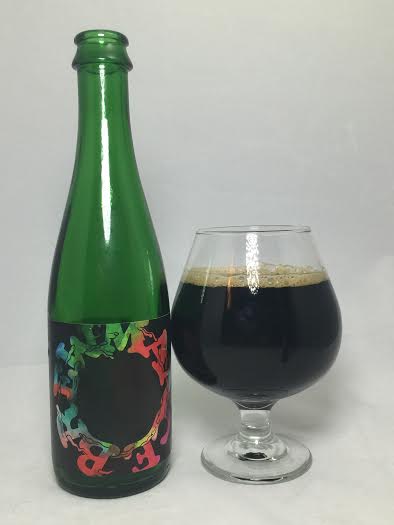 I remember picking this up years ago at one of my local stores. It is a very nondescript label with an aura of mystery. To my surprise when I poured it out, the bottle was actually green. The imperial stout inside combined with the wrapping on the top with cork and cage hid the true color of the bottle. Not that I store my bottles in direct light, but I'm hoping this bourbon barrel-aged imperial stout with honey has not been negatively affected by the green bottle.

Pours jet black with less than a finger of light brown/tan head.

Tons of oak and char on the aroma with even a little bit of smokey tobacco. Bourbon is present, but mellow and smooth.

Well, the taste is interesting. Every quality you look for in a big barrel-aged imperial stout is so sedated and falling asleep that you'd think this has just taken an Ambien. Subdued, bitter dark chocolate greets the front of my tongue with a thud of bitterness and mellowed-out flavor. The charred oak from the aroma steps forward near the middle of the mouth, but it is not accenting other flavors, but instead it seems lost and alone. I can't help but feel that the green bottle has allowed some light damage to take place because I'm getting a distinct black licorice taste that I want to go away. As for bourbon, I mean, finding it is like finding Waldo in a crowd: it takes forever, and once you do it, you really aren't jumping for joy. Even with a few years on this, there's a tinge of alcohol flavor, but luckily it isn't stinging. As for the honey, it would be nice to find some of that sweetness to come in and combat the bitter, dark flavors, but I just can't find it.

Mouthfeel is ludicrously thin for an 11.20% imperial stout. I won't go as far as to call it "watery", but the body is diluted to an almost poor quality porter. Some of the unpleasant flavors overstay their welcome, but even with that aforementioned minor alcohol taste, the 11.20% is well-hidden.

Brewmance is a letdown to say the least. Omnipollo is known for creating some unique beers overseas, but this collaboration just didn't pan out. Every flavor was watered down and what was there seemed to have gone bad. Add in a watery feel and this one just missed the mark completely.